The Famous Five Party Game as played by Fiona

First up: I didn’t throw a party to play this game. It’s really not that sort of game in fact! I bought it mostly because I just love Eileen Soper’s work, and because it wasn’t too expensive. I don’t know how many 1950s boxed-games have survived the past 60 years, so when I saw this one was in pretty good condition I felt like it was something I should add to my collection.

Is not the shortest or catchiest title for a game, but the box pretty much sets out what to expect.

The game I have is almost complete with the instructions and 11 out of the 12 cards. 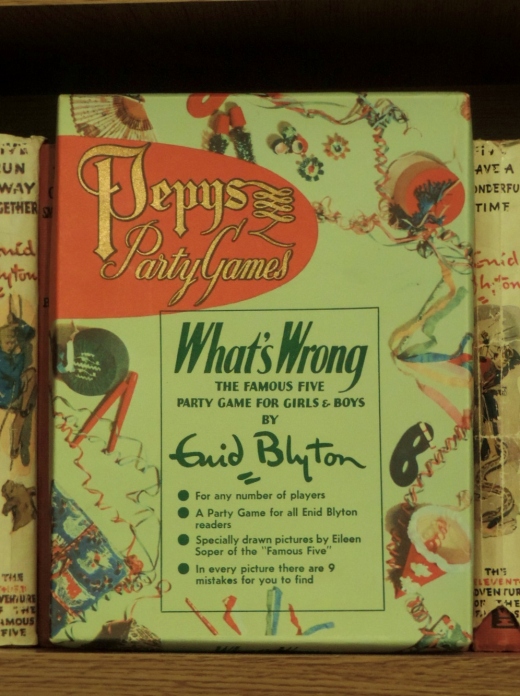 This is an easy-to-arrange game for girls and boys, which can last from about 10 to 30 minutes as you prefer.

There are 12 cards and 3 different pictures so that there are 4 cards of each picture.

In each picture the artist has purposely made 9 mistakes. The mistakes are listed below. Some are easily seen while others require careful observation.

HOW TO PLAY. Give one card to each player. Tell them all that on each card there are 9 mistakes and allow them say 10 minutes to discover what the mistakes are. When the time is up ask anyone who has found 9 mistakes to come forward to you with their card. If none found 9, then those with 8, or 7, and so on. The player or players should then tell you verbally what the mistakes are, pointing them out if necessary on their card. You can check the answers by the list below. You will probably find it better not to let the other players hear the answers given by any individual player.. If you wish to make the game last longer you can now ask the players to exchange their cards so that everyone has a new picture. Give them another 10 minutes and again check their verbal answers. As there are 3 different pictures the cards can be exchanged once again so that everyone will have attempted three. The winner is the player who gives the most correct answers.

So those are very in-depth! It really sets the scene for the sort of party this would be used at – the sort where Mummy organises all the games and doesn’t want anything too rowdy!

It definitely isn’t the sort of game where the kids could play alone, not considering the answers are all printed at the bottom of the instructions! 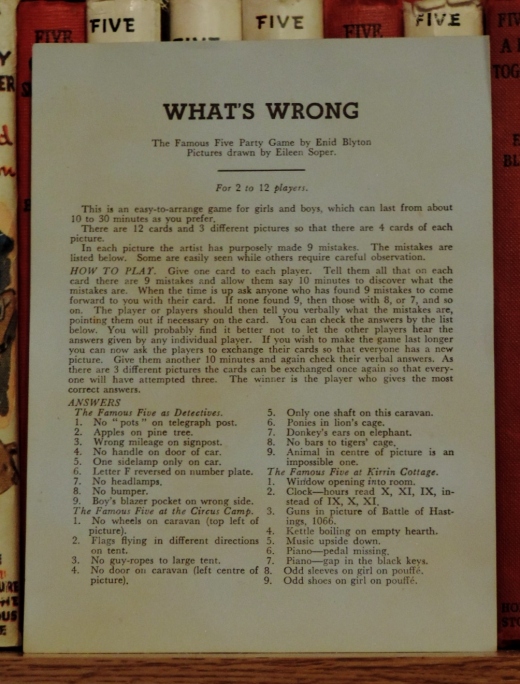 There are three different cards:

No. 1. The Famous Five as Detectives. This is a scene from Five Get Into Trouble as it features the black Bentley – KMF102. 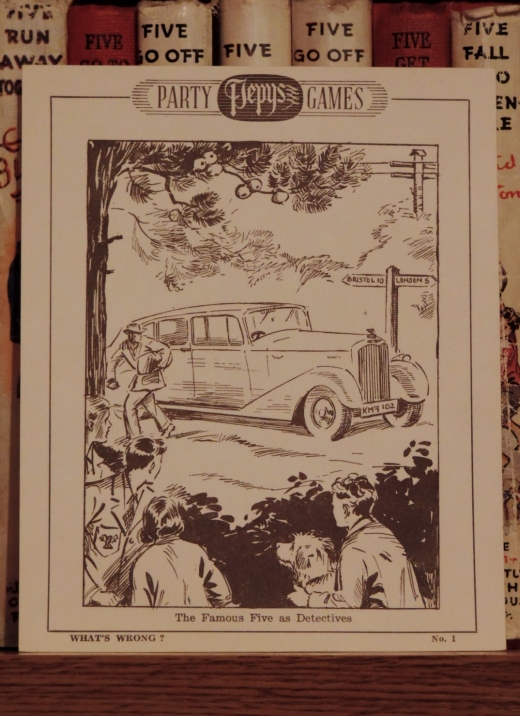 No. 2. The Famous Five at Kirrin Cottage. This could be from any Kirrin-based story, really. 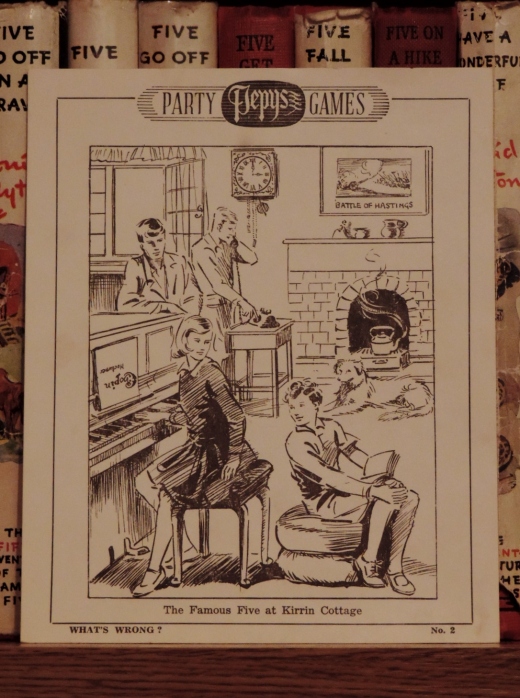 No. 3. The Famous Five at the Circus Camp. This would either be Five Go Off in a Caravan or Five Are Together Again perhaps. 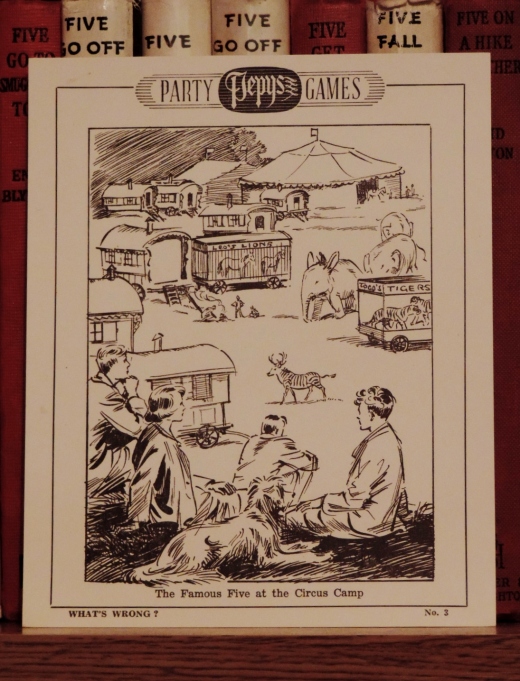 As I said at the start I did not organise a party to play the game. Instead I did my best to not glance at the answers and then looked at the cards.

Card No. 1. I managed to come up with seven possible answers.

Five were right and I missed four others. In my defence I am not an expert in 1950s cars, telegraph poles or boys’ blazer pockets! I imagine it would have been easier for children back then as they would have been more familiar with these things.

Card No. 2. I only managed 5 suggestions this time! At least all five were right, but again I fell down on quite 1950s things like windows and fireplaces! Interesting to note that George is merely ‘girl on pouffe’!

Card No. 3. I did a little better this time. I has six ideas and six right answers. My knowledge of tent and caravan architecture is lacking though.

This is a nice little game – mainly for the Eileen Soper illustrations. I’m not sure her distinctive but sketchy style truly lends itself to a ‘what’s wrong’ type of game, though. It’s quite easy to mistake a rough line as something it isn’t. I’m not imagining doing it with Betty Maxey illustrations – those have enough ‘what’s wrong’ moments without her adding anything extra. Furniture, people and animals missing legs abound.

I think I’ll try the cards out on some unsuspecting friends and family and see how they do!