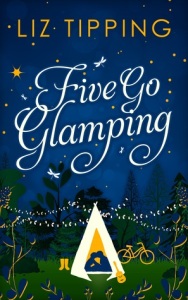 Before you worry, this is not another of the Bruno Vincent’s grown up Famous Five, but a play on the idea of four people and a dog experiencing camping or glamping and “getting back to nature” but with a few added comforts.

This novel by Liz Tipping, who I believe contacted us on Twitter originally informing us of the book’s existence, is not one of the usual crime novels I have been bringing you, but a sort of chick-flick / romantic comedy book, a light read, but it works on so many levels. Let’s have a look at what we have shall we?

I do admit to laughing to myself (I was on the plane to Tenerife at the time) when I realised the main character was called Fiona and one of her best friends was called Stephanie. I did feel though, given the actual story that the names needed to be the other way around, but you can’t have everything.

I really connected with the main character,  Fiona, possibly because the issues she was having mirrored my own at the time. Lots of modern issues such as finding a well paying job, living in her own place, and wondering if her boyfriend was the right one. Without a doubt, the main character should have been called Stephanie because it feels as though Liz Tipping  was writing about me.

The other characters are maybe not quite so well rounded and sometimes could seem a little 2D but they are a laugh. You have Sinaed, who is into various new age things and presents the others with the opportunity to go glamping in Devon (I think) in a New Age  yurt decked out with various luxuries in return for some photos being taken of the group to make the festival look busy.

Stephanie is the high powered sort of business woman who is very practical and desperately working hard in an attempt to make it big. She is the least enthusiastic about the glamping but insists on taking them all to Selfridges to get appropriate clothes. Ironically she is the one who overreacts the most in the book.

Kurt is the next character and he comes with a dog called Brian Harvey (this is never really explained why he’s called Brian Harvey, but never mind). He’s the gay best friend, so one of the girls in a way but strangely distant from them as well. He’s surprisingly practical in some aspects of the trip, but is nursing a broken heart so slightly prone to weeping.

Sam is our alpha male in this little venture, he comes to rescue the gang and more importantly Fiona several times during the course of the book. The two of them click, enjoy their time together and Fiona finds herself doubting her relationship with the slippery Connor and wishing she had the courage to make huge changes in her life because of the way Sam is the yin to her yang. Its a perfect balance for her and Sam is a very realistic character and is a good solid one.

As I mentioned this book arrived in my life just at a vital point in the last few months and made me see that taking chances way outweighed the ‘safety’ aspects of staying somewhere I didn’t like any more. I related to the Fiona character way more than I thought, the organisation being the only thing I didn’t connect with her on, but that’s all right.

The whole book is some sort of self journey, our character Fiona finds her life challenged by this strange new man Sam, but in a good way. She finds out what she really wants and sees opportunities that she wouldn’t see otherwise if it hadn’t have been for this trip and new experiences. Various mishaps before and during her trip away help her change her perspective on life and its just lovely to see.

The dog, Brian Harvey is also instrumental in helping Fiona come into contact with the dishy Sam who clearly has demons of his own. However, the puppy seems to become quite a firm favourite with all and quite a plot device. All right he’s maybe less of a practical dog, as in he wouldn’t be Timmy and run to get help, but he does like to make sure you are alright if anything happens to you. Hes just a fluffy plot point to make up the handy Five.

Maybe not entirely like Blyton, we don’t have a juicy mystery for example, just a lot of self discovery, the handy five characters to make up the numbers and a tent. So apart from the title which lends itself to being very Blytonian, there maybe isn’t a lot that would make the mind jump to an Enid Blyton connection, at the same time, it’s probably a very good look at the stark differences between camping in Blyton’s day and camping in the modern day. The luxuries are a far cry from our Blyton characters roughing it out in blankets and ground sheets. Either way I really do think this book is worth a read for the tenuous Blyton connection. It is a romantic comedy book, but it really is well written and sensitive. I would recommend.