The Adventure Series covers through the years

I recently looked at the covers of the Famous Five covers through the years. There were so many incarnations of the 21 books that it took two posts. The Adventure Series hasn’t been reprinted nearly so many times, so this should be both shorter and simpler.

As with so many things the original is the best. Stuart Tresilian did beautiful wrap-around dust jackets for the first editions, published by Macmillan. 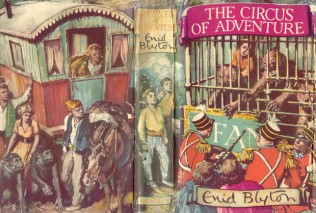 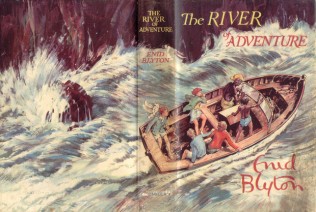 He also did wrap-around dust jackets for the first six books when they were published by Thames Publishing in the early sixties.

Slightly contradicting myself now, I will admit that I think that the Thames ones might actually be slightly better than the Macmillan ones. The Thames ones are more vibrant (perhaps due to being less aged, or more modern printing techniques I can’t be sure.)

It’s interesting though to compare the two versions of each. They mostly have very similar layouts, the children often wear the same clothes. They are almost like first drafts and final products of covers. 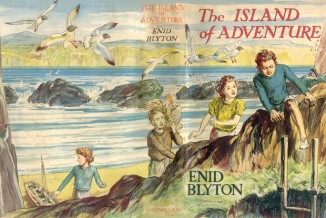 The jackets for Island of Adventure have much the same layout. The children are further up the hill and nearer the mine shaft in the Thames one, making it look like that one was perhaps the same scene just a minute or two later. The children are wearing the same outfits – though as I said before, the Thames jacket is much more vibrant.

The change in positioning of the children seems to be related to the spine of the book. On the Macmillan cover, when closed, only Jack would be on view. The Thames cover would just show a strip of the scenery.

Again this is much the same scene, only more vibrant. The way the castle is a bit more prominent and how Lucy-Ann is grabbing Tassie makes the Thames cover just a little more dramatic. This time Lucy-Ann and Philip have been moved, presumably to give a clear spine (at first I thought it was Philip beside Tassie!). The children are in the same clothes in both covers, and they’re the same clothes as the previous book, too.

related post⇒ The Adventure Series on TV: The Castle of Adventure 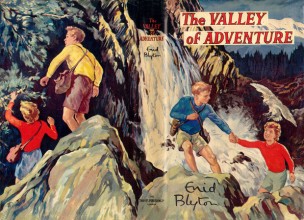 Unusually the Macmillan jacket for Valley isn’t a complete wrap around. The front and back show two parts of a cave scene while the spine has a separate illustration of  Philip. This is one of only two books to have a significantly different design between the Macmillan and Thames covers. This time the children are wearing different colours of clothes; they differ from the previous books and between the two editions of Valley. The colour palette is still the same but Philip is now in yellow instead of turquoise, Jack has changed from red to blue, Dinah is wearing red rather than yellow and initially Lucy-Ann is the one in turquoise (previously she was in blue), but she is then in red on the Thames cover. It’s not always easy to tell which child is which – I’m assuming it’s Philip on the spine due to his tufted hair, and that it’s Jack helping Lucy-Ann up the rocks.

With The Sea of Adventure we are back to a full wrap-around jacket. Jack moves off the spine to beside Lucy-Ann for the Thames edition. The colours of their clothes have changed again (except for Dinah who’s still in red) and between these two versions Jack goes from long sleeves to short, and Philip’s shirt changes both sleeve length and colour. (Incidentally I’ve always found long sleeve tops and shorts an incongruous pairing. If I’m warm enough to wear shorts it’s likely too warm for long sleeves, and if it’s cold enough for long sleeves surely its too cold for shorts?) As with previous books the colours are much brighter on the Thames cover. The overall layout is similar, though the rear page altered more than the front, with a large rock brought into the foreground. 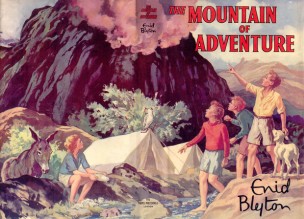 This is another really similar scene. Philip(?) moves away from the tent opening and off the spine, and it’s him then pointing at the mountain instead of Jack. Clothes-wise Lucy-Ann is wearing a different outfit (short sleeve blue top instead of long sleeve yellow) but it’s the same on both covers and Dinah is in the same as the previous book.

I’m not actually sure which boy is which here. I had thought the boy in the tent was Jack, as Kiki is above him. But if you look at the Thames cover, he has a tufty lock of hair (it’s a different top, mind you though the same colour), and the other boy looks more red-headed. So then it must be Philip in the tent? Yet Jack is then wearing the exact same outfit Philip was on the cover of Sea! Perhaps Jack and Philip swap outfits between the Macmillan and Thames covers?  Or maybe Stuart Tresilian didn’t care very much about clothes. That might explain why Philip’s (Jack’s?) shirt has one long sleeve and one short sleeve! 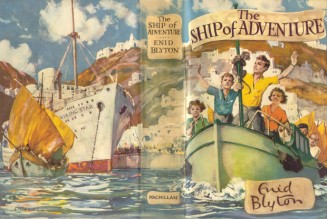 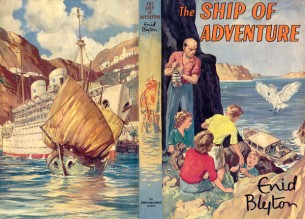 The Ship of Adventure is the second book with a major design change between covers. The rear covers are very similar, the cliff to the left is larger and the smaller boat is more central on the Thames one. The spine and cover are entirely different, however. It is no longer a wrap-around illustration as the spine and front cover are two further separate scenes. The spine shows a vignette of the smaller boat and the front cover has Bill and the children on Thamis.

The children are wearing the same clothes in both versions, but not all are the same from the previous book.

It strikes me now that it’s odd to have Bill on the cover – all of the previous books have had only the children (plus Tassie, but she’s also a child). He doesn’t appear on the last two covers of the series, either, though Tala and Oola are on River and a host of circus-folk are on the Circus cover.

If that wasn’t enough the Macmillan editions also had a pictorial board cover.

For Island, Castle, Sea and Mountain you can find internal illustrations that are close to matching. I don’t know what came first, in fact. I assume the internal illustrations were done and then Tresilian did cover ones. There are enough differences (the backround of Island, the missing stick from Sea, the position of the dog on Mountain etc) to suggest they were all at least partly redrawn. 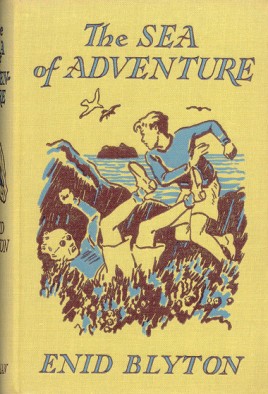 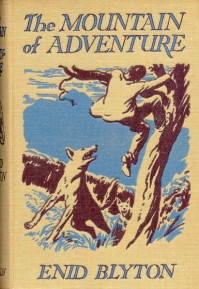 Valley’s cloth cover looks like an amalgamation of a few internal illustrations – there are ones showing the waterfall and other with a swooping aeroplane. 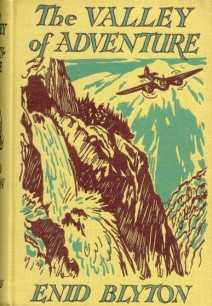 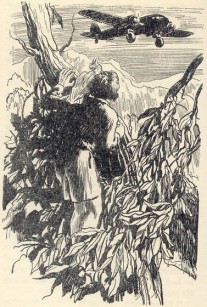 The Ship of Adventure‘s cloth cover is interesting as it has a scene shown from the other side.

The Circus of Adventure’s cloth cover has as scene that’s not illustrated in the book – Philip in the bear cage though there is one of him with the bears outside. I think it’s this cover (I didn’t have any dust jackets when I was younger) that always made me imagine the bear’s cage as a big round one on the ground rather than a rectangular one on wheels.

The River of Adventure’s cloth cover is also an amalgamation of a couple of different illustrations. There is one of the silhouetted boat, and a few others with tall palm trees.

As with the Famous Five, the original cover artwork has been used again later. This time it has been cropped down to a square with very brightly coloured blocks above and below. It’s a pity so much of Tresillian’s art is chopped off – you can’t even see the castle on the cover of The Castle of Adventure! 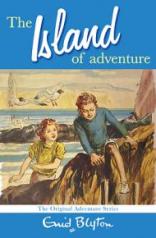 Being the first in the series, Island has the most different editions and is the only one to have a full facsimile edition (for its 50th anniversary). I’m not sure if it has the back of the cover, too, but I doubt it. 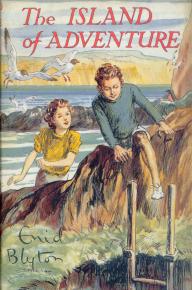 That’s the facsimile on the left and the original on the right, by the way. Funny how the facsimile is paler than the original! The signature has changed as well, it’s now the same as the ones on the other Adventure Series first editions – but it’s not the same as her famous signature as it appears on The Famous Five books (from 1951 on).

I said earlier that this post would be simpler and shorter. I was wrong. I’ve written so much about Stuart Tresilian’s work alone that I will have to look at everything from the Armada paperbacks onwards in another post.

11 Responses to The Adventure Series covers through the years