Rainy Day Stories is the first of a two book series published by Evans Brothers, the second book being Happy Day Stories.

Despite it having been the best weather we’ve had all year this past weekend, I chose this book at random. I then chose three stories based on their titles sounding interesting.

This isn’t the first edition but I couldn’t resist using the Eileen Soper cover from the second edition. My edition has no dustjacket unfortunately.

Story number ten in the collection makes a mockery of my previous assertions that bananas didn’t feature in Enid Blyton books. This story was originally published in Sunny Stories in 1932, so well before the WWII removed bananas from the diets of most people in Britain. As far as I’m aware they didn’t feature in any of her major series during or post war, though.

Anyway, the bananas in this story are bought by nurse for Eileen, Tommy and Mary. She buys seven at a time because they are seven for sixpence (around £1.14 now, so only marginally more expensive than today. An average banana at Tesco costs 14p, so you’d get seven for 96p, or around 8.5 for £1.14) and she buys them every other day.

But suddenly bananas aren’t lasting two days, as they are going missing in ones and twos from the bowl. The children deny taking any, and of course Blyton’s children never lie (or at least not the ‘nice’ ones with nurses and large banana budgets). It’s a mystery to them, but not really to the reader as there’s an illustration of a monkey holding a banana early in the story.

The children lie in wait for the banana thief and find the monkey belonging to the sailorman next door is sneaking in the window and helping himself to bananas whenever he likes. I’m amazed the monkey had the restraint to eat only a few and not just take the whole bowlful!

It’s about a gnome who repairs things with glue. He’s very cranky and always complains that the pixies and elves who use his service are very careless and shouldn’t break so many things. Clearly he doesn’t stop to consider he would be out of business without them breaking things! Though I do understand, I’ve often said that working in retail would be great if it wasn’t for the customers.

Anyway, in one of his cranky outbursts he accuses some of his customers of stealing his glue brush. He even calls in Mr Lockemup, the policeman (everyone has descriptive names it would seem), but eventually discovers the brush is stuck to the seat of his trousers because he has sat on it. He is suitably chastened by this and becomes a bit friendlier. 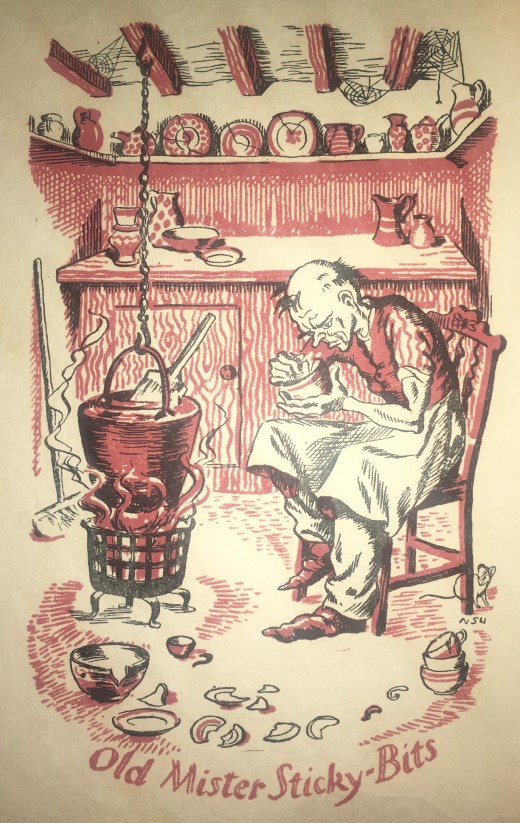 This appears to be based on a very old fable (I’ve read a version in Aesop’s fables but it seems to predate even that). The fable is The Milkmaid and Her Pail, whereby a milkmaid is so buys dreaming of the riches she will earn that she spills the milk and loses her chance to make any money. The moral being don’t count your chickens before they are hatched.

With Mr Noodle, he is planning to sell 50-odd eggs. Then he will buy a goose to sit on goose-eggs, then a goat for milk, and then a cow, and then a big house to look down upon everyone. He then falls in his eggs and smashes them. He has been boasting out loud the whole time too, so there’s a second moral in there about pride coming before a fall, I think. 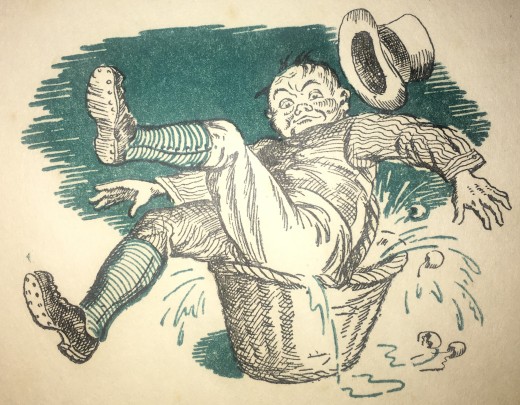