This was supposed to be an easy review for me, but it has become complicated and cost me money! (Don’t worry, Cunningham & Petrov will return next Friday!)

While adminning my Enid Blyton Facebook group several answers to the security question – What is your favourite Enid Blyton book? – were Chimney Corner Stories. I also had a skim through the book in response to a question and spotted a few interesting stories, so decided to do a review.

As always, I started with research. I have a Dean & Son edition (I normally dislike D&S but this one has a nice dustjacket, and short story collections aren’t my main interest), and wanted to establish the first edition details and also look at the original sources for the stories, as Blyton rarely wrote fresh material for those sorts of books. 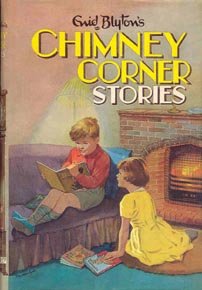 At this point I noticed that the story lists didn’t match. At first I thought they were just in a different order, as several were the same. But no. Dean and Son (who I now feel I’m even more justified in disliking) have reprinted the book with the same number of stories but only 8 are the same, the remaining 12 are from elsewhere.

I mean, why? Why publish a new edition but leave out over half the content – yet make it the same length with other content? (Abridged books annoy me greatly but at least they’re usually a bit more obvious about it).

I was so annoyed that I have now ordered an early edition with the original 20 stories but came across another anomaly at the same time. I found ten or so possibilities on eBay which I then looked at more closely. A few were 1953 editions, by Latimer House. Two of the sellers were good enough to show the contents page – with all of 9 stories! I have no idea what that’s all about but I’m glad I paid attention, else I would have been even more annoyed. 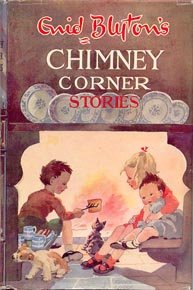 For now I will review this shoddy copy as it’s all I have, and will revisit the real thing when it arrives in the next week or so. I mean, who knows, maybe all the people saying this was their favourite book had this reprinted copy anyway!

First edition contents on the left and Dean & Sons on the right.

The Secret Cave
The Enchanted Table
The Magic Walking-Stick
Winkle-Pip Walks Out
The Three Strange Travellers
The Party in the Hollow Tree
The Golden Enchanter
The Little Paper-Folk
The Enchanted Balloon
Mary Jane, the Little Doll
Polly and the Monkey
The Lazy Giant
The Skippetty Goblins
The Big Humming-Top
The Disagreeable Monkey
Mr. Curly-Wig’s Adventure
Dame Crabby’s Surprise Packet
Bonzo Gets Into Trouble
The Little Bully
In the King’s Shoes
The Clockwork Mouse
Winkle-Pip Walks Out ◊
Trit-Trot the Pony
The Magic Walking Stick ◊
The Snoozy Gnome
The Three Strange Travellers ◊
She Turned Up Her Nose
The Secret Cave ◊
The Proud Little Dog
The Little Bully ◊
The Six Little Motor-Cars
The Unkind Children
The Little Paper-Folk ◊
The Tiresome Poker
The Enchanted Table ◊
The Boy Who Boasted
The Disagreeable Monkey
The Smickle-Smockle
The Golden Enchanter ◊
The Wizard’s Umbrella

◊= appears in both books

All the stories from the first edition – with the exception of The Little Bully which came from Teacher’s World – come from Sunny Stories Magazine. The additional content for the Dean & Son book also comes from Sunny Stories but most were also published in this book, too. 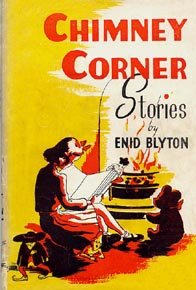 Just out of interest the 9 story edition contains the 8 stories which appear in both editions above, plus The Disagreeable Monkey.

The stories in this collection can be sorted into five broad categories.

Fantasy/magic
Set in a world of witches, wizards, gnomes, elves and fairies. There are a few common types of story under the fantasy umbrella, such as a naughty character who angers a witch or wizard or misuses a magical object and experiences the consequences, or where children from the real world come across magical characters and either perform a good deed for them or are punished for bad behaviour.

Toy stories
Where the nursery (or toy-shop) toys come to life when nobody’s around.

Actions have consequences
A lot of the magical stories could fit into this category but I think the regular human tales of bullies and kind-deed-doers are a genre of their own.

Animal stories
In short stories the animals usually have a ‘voice’ of their own, even if it’s only internal and they behave more like people than animals. Usually there’s a moral about actions having consequences, too.

My favourite kind of stories are the adventure ones so it’s a shame to only have one in this book, but I expect that adventure stories are harder to write in short form. I also enjoy the toy stories but my least favourite are the fantasy ones. I tend to find there are so many that they are rather repetitive with their ‘naughty imp makes bad decisions and is punished by Dame so-and-so the witch’ plots, but there are some clever ideas to be found still, and if you only read a few now and again you might not notice the repetition.

The majority of the stories in the book are about magic, as above my least favourite genre.

There’s a lot of repetition in names amongst these stories as well as in the plots. Blyton used similar plots across many stories as she wrote hundreds of them, so I blame the publisher for choosing so many similar ones for this collection.

In an alliterative feast we have a Tappetty Witch (the giver of Winkle-Pip’s wishing suit), Tell-Tale Tippy and Enchanter Too-Tall (receiver and giver of the magic walking stick), Tippit the snoozy gnome, Tiptoe Village, a Pippit…

There are two stories with exceptionally similar plots – The Magic Walking Stick (TMWS) and The Tiresome Poker (TTP). In TMWS Enchanter Too-Tall gives Tell-Tale Tippy an enchanted walking stick to punish him for telling tales, while in TTP Sleeky the pixie steals a magic fire-lighting poker. In both stories the main character then desperately tries to get rid of the magical object, throwing them out windows, in bins, into water, and so on. In both the wet object returns in the night and gets into the bed to warm up. Both characters have to mend their bad ways in response to the magic objects’ constant presence. 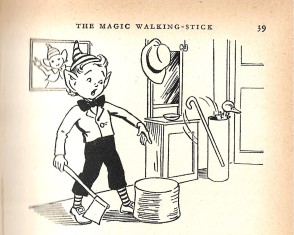 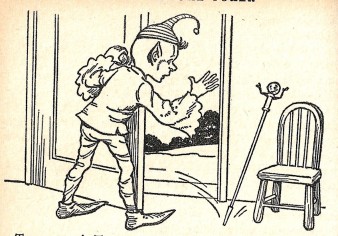 A third – The Wizard’s Umbrella – is also quite similar. Ribby’s always borrowing things and never returning them so Wizard Deep-One enchants a dog-head umbrella and lends it to him. It then comes alive and after chasing Ribby home, stays there demanding to be fed constantly. 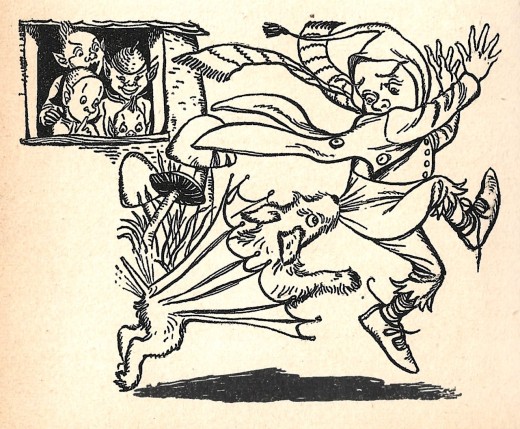 A couple of the stories are set in what you would think would be the normal world until someone magical turns up. In The Unkind Children Winnie and Robert are throwing stones at birds when Mrs-Do-the-Same-to-You turns up and drags them into the woods where they are set upon by pea-shooter wielding brownies. Likewise in The Boy Who Boasted Sammy is just boasting away when Smink shows up and boasts right back. Whatever Sammy boasts about, Smink boasts harder – and can prove it’s all true, unlike Sammy. I started to wonder if Smink’s magic power was making things come true just by saying them, but it didn’t look like that by the end. 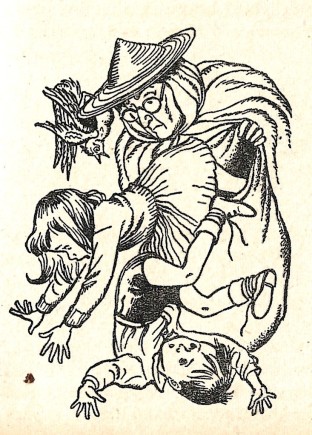 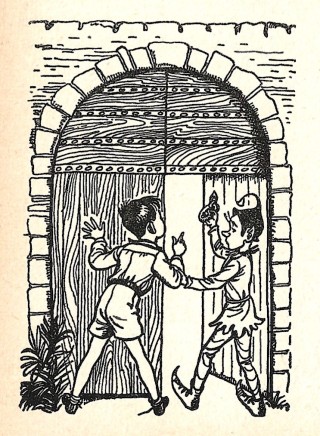 The other story, The Little Paper-Folk, is a little different – Jimmy and Susan had been cutting out pictures from magazines when a casual wish not only shrinks them but also brings the paper things to life. Things become tense when the paper people accuse the children of being stuck-up – but it’s not that they don’t want to ride in the car or eat the chocolates, they can’t! They’re real solid people, the cut outs, although alive are still flat! 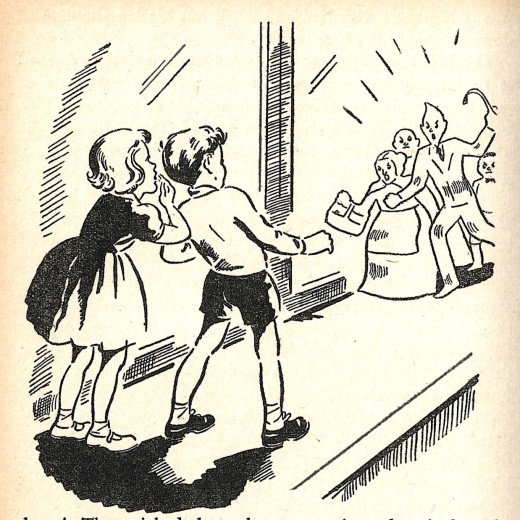 The opposite occurs in Winkle-Pip Walks Out, after being given a wishing-suit he must grant six wishes every year to regular children, else the suit will stop working. He sets out to the normal world – but he’s warned that children today might be too busy with their wireless-sets and Meccanos to believe in fairies. I wonder if Blyton felt that way (today it would no doubt be too busy with Tik-Tok and Fortnite) as it’s a bit odd, surely Meccano is quite innocuous? As it turns out most of the children he meets are disbelieving and quite nasty! 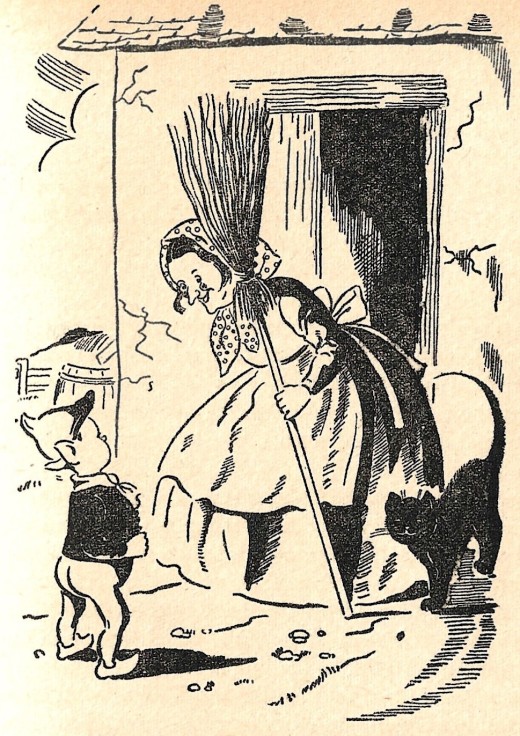 Of all the magic stories my least favourite has to be The Snoozy Gnome. Tippit falls asleep, his clock stops, he misses a party, but tries to attend the next morning thinking it’s still the day before. As he is dressed as a bear he terrifies everyone. The conundrum of the mistaken time is explained too many times, and really very little happens! 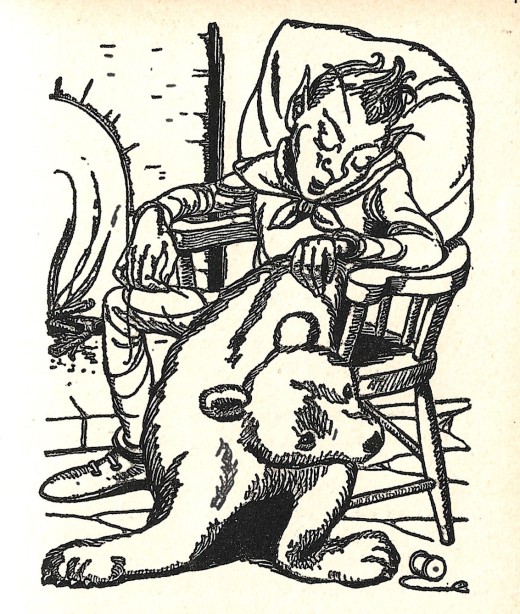 The most interesting story is The Golden Enchanter. In it, the Golden Enchanter hires a new assistant who then tries to rob him. In what is quite an exciting scene they change from animal to animal in a chase – rabbit vs fox, lark vs eagle, mouse vs cat and so on. It made me think of the Wizards’ duel in The Sword in the Stone where Merlin and Madam Mim change rapidly into different creatures. 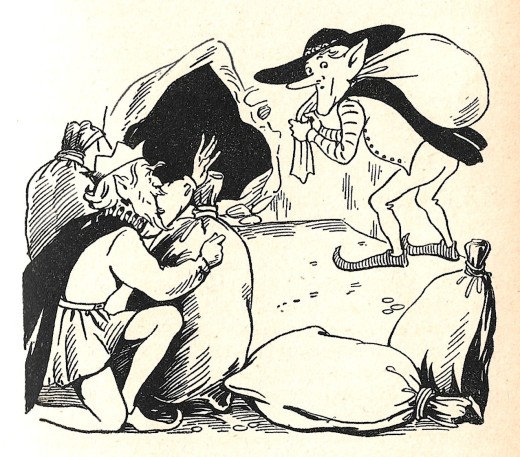 The last magical story to write about is The Enchanted Table. This is an odd one for me as nobody comes off very well in it. The table is mistreated, but not terribly – the children are careless in kicking it or spilling things on it while eating – so the table starts hitting people, then walks out. It has some adventures, finding itself in places no better than where it started, before ending up somewhere just right. 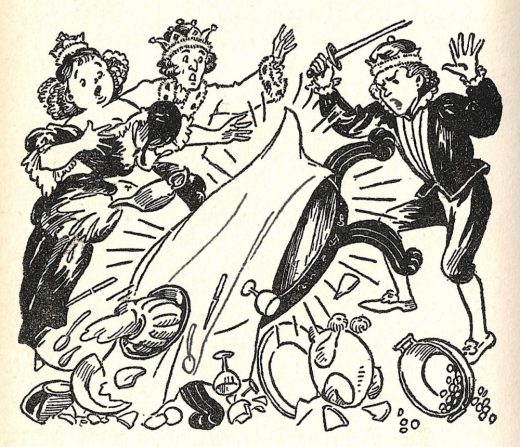 What with all the confusion over which stories I had, I’ve written an awful lot already so I will write about the rest of the stories in a second post!