CHAPTER ONE: THE LETTERS

It was a normal day in Kirrin. Seagulls were squawking and fishermen in boats were out on the water. Kirrin Island looked out silently over the waves as they crashed onto its beach. Julian, Dick and Anne had just arrived at Kirrin Cottage. Aunt Fanny was there to welcome them at the door.

“Hallo! How has your summer been, Julian?” said Aunt Fanny, bustling around. “I hope you behaved yourself Dick. Anne, don’t look like that, George and Timmy are in the kitchen.”

“Come on, Dick, Julian! Let’s go see George and Timmy!” Anne shouted, running into the kitchen. George was leaning against the table with Timmy at her heels. Her hair was short like a boy’s and curly. She wore boys’ shirt and shorts. If you hadn’t known she was a girl, you would think she was a boy

“Hallo! Timmy’s been eager to see you!” It was true; as soon as they walked into the kitchen, Timmy was running straight for them and it was such a shock for Anne that she fell over!

“Timmy, get off! Yes, I know it’s been a long time but it doesn’t mean you have to run at me and knock me over!” Anne said while Timmy was licking her face. Eventually, Aunt Fanny, had to scold Timmy into leaving Anne alone.

“Sorry Anne. “ George said. Before Anne could reply Joanna sent them up to their rooms to unpack. George, who had been forced to watch Anne put the many soft toys from her trunk onto her bed, was very bored. Presently there was a knock on the front door.” I’ll get it. Mother!” she shouted, running down the stairs. The postman was there.

“’Allo, George. Sorry the post is late. Sorter fell ‘sleep on the job, poor girl. Anyway, you’ve got post and there’s also post for your cousins. ‘Right? Bye!” She clutched the four letters. The handwriting was almost unreadable and she didn’t recognise it. Also, it included the bedroom they normally slept in at Kirrin. She flipped her letter over. A stamp covered the opening of the envelope. It was a crest with a large H in the middle with a lion, serpent, eagle and badger surrounding it. She tore it open, confused. It took George several times to take in what it said.

Dear Georgina Kirrin,
We are pleased to inform you that you have been accepted at Hogwarts School of Witchcraft and Wizardry. Please find enclosed a list of all necessary books and equipment.
Term begins on 1 September. We await your owl by no later than 31 July.
From
Minerva McGonagall
Deputy Headmistress

But one thing was for certain. The Kirrins were going to Hogwarts. 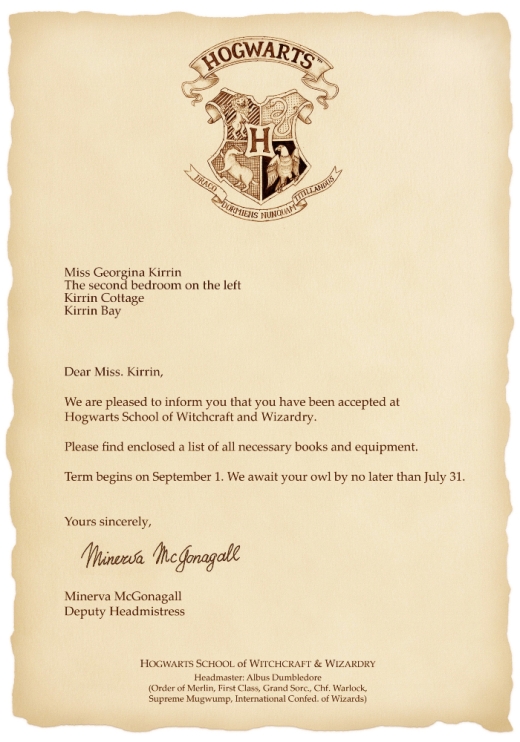 “You’re what?!” Uncle Quentin boomed. The Kirrins were standing in Uncle Quentin’s study. They had been in there for two hours. Anne was wearing a face of terror; George, Dick and Julian were rather excited; Aunt Fanny looked rather proud and Uncle Quentin looked like a time bomb.

“Father, we’re witches,” George pointed at Anne and herself, “and Julian and Dick are wizards. It’s not abnormal.” she said, solemnly.

“Abnormal?! Everything is abnormal about magic!” he roared. “You know what I’m going to do with you, Miss Georgina Wilhelmina Kirrin! You are going out of this house! Forever! Your freak cousins, too!” After what he had said, George ran out of the room, tears of anger and shock in her sparkling blue eyes.

“Darling, darling, I think you’re over reacting. You should be proud of your daughter! Your nieces and nephews, too! Come now, do any of your fellow scientists say ‘I have a daughter who can do magic!’ No, they don’t! Now, dear, I’ve got a secret to tell you. A secret that I haven’t shared with anyone except Joanna. I was hoping that George and her cousins wouldn’t be affected through my Kirrin ancestors, but apparently they are. I am a witch, Quentin.”

It was unbelievable. Aunt Fanny, a witch? ‘I suppose it explained why she made such good cakes,’ Julian thought. He looked across the room at Uncle Quentin.

His uncle had gone quite green and his lips were quivering. Eventually Quentin whispered “I need some time to think about this. I need everyone to get out of this house. Now. Pack your bags. Don’t talk. Just get out.”

Aunt Fanny didn’t look offended or pleased. Everyone obliged. By the time Julian, Dick and Anne had walked upstairs, George had already packed. Timmy was at her heels. Apart from the sounds of Dick loudly putting his clothes and other knick knacks in his trunk, Kirrin Cottage was silent. In an hours’ time, Aunt Fanny, now quietly sobbing, and the rest of the Kirrins left the house. Anne was also sobbing into Julian’s chest while he held her hand as they walked down the road towards the beach. Aunt Fanny was taking them to the station so they could take a train somewhere that Aunt Fanny had not revealed. Dick was trying to keep everyone’s spirits up but no-one laughed.

The waves rolled mournfully onto the pale sand. Buildings were damp from the crying of the heavens above. Seagulls cried sombre tunes. The world seemed to be in pain. After the half-hour walk to the station, they arrived. Pony traps were lined up, the owners looking bored and angered because the five – no, six – did not order them to take them and their trunks.

“Aunt Fanny, why didn’t you get one of those men to bring us here?” asked Dick, pointing to the pony traps. This was the first time someone had spoken directly to her since Uncle Quentin’s speech because they were afraid that she would zap them with the wooden wand sticking out of her skirt pocket.

“Because Uncle… because Uncle… he cut the telephone wire.” she replied, stuttering slightly. It looked like she couldn’t say Uncle Quentin because it would upset her so. Before anyone could chip in, she said “now, let’s get into the station. The train will be leaving soon.” Silently, they walked onto the platform. The well-built and kind porter was standing by the wall next to the entrance. Aunt Fanny walked over to him.

“What destination, ma’am?” he asked. Aunt Fanny mumbled something but Dick, who was closest to her, couldn’t hear. Then, she showed her wand to the porter. “Ebony, 11-and-a-half inches, unicorn hair. You must be Fanny Georgina Kirrin. Train arriving in one minute,” he said. Gripping her wand firmly, she bustled over to a plain brick wall. To everyone’s utter surprise, she started tapping random bricks. Then something happened, something more thrilling than anything they had seen before.

The wall shifted apart to make a narrow archway. Nobody around them seemed to notice what had happened. Julian pinched himself. It was unreal. A wall had opened and revealed another train platform. But that shouldn’t be there. Outside, where the other side of the wall was, bushes were normally surrounding it. A deep purple train could just be seen pulling into the mysterious platform. “Well don’t hang around children. This way, on to the train,” said Aunt Fanny.  Slowly and cautiously, they made their way through the archway. Aunt Fanny was ushering them into a carriage, full of sleeping people. Anne saw a sign on the side of the train. It read: The Knight Train.

8 Responses to The Famous Five Go to Hogwarts, Fan Fiction by Abi, chapters 1 & 2