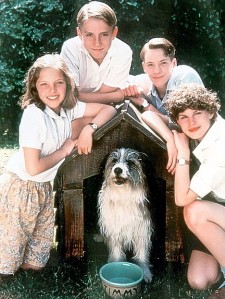 So it has been absolutely ages since I posted anything about the Famous Five TV series, and when I did, I think I made it utterly confusing. Which had helped when coming back to the decision to write about the series. Now I think its easier to look at one series at a time, episode by episode!

As I have already, technically done Five on a Treasure Island so I am starting  again with Five Go Adventuring Again and only looking at the 90s TV series.

Now as many of you know, the 90s series is my favourite, probably because I grew up watching it and forming an emotional attachment to the characters and they way they are acted. So in my eyes, the 1990’s series is superior to the 1970’s one. As I’ve grown up and watched the both series with adult eyes I can see the arguments for and against both series. My loyalties still lie with the 1990’s series however.

Anyway onto the actual story!

Now, as in the book where Blyton mentions that it is the Christmas hols, this episode is clearly filmed in the good summer/spring weather, which doesn’t easily lend itself to the story too much. There are parts, such as Timmy being sentenced to the kennel and being stuck out in the snow which causes George to bring him in when she thinks he might get a cold, which don’t really feel too right. There is torrential rain instead, but its not quite the same as the wonderful wintry scenes we’re promised from the books.

Still if you’re only allowed to shoot during the summer, I don’t suppose there is much you can do!

As I’ve mentioned before I do like the period feel of this series, the costumes, the homes, the horse and cart – which makes an prominent appearance in the beginning of this episode.

I’m sure you all know the book quite well, even I do, though its not my favourite, and Mr Roland doesn’t feel quite right to me from the off. He looks all right, but the accent… well it doesn’t work for me, plus shouldn’t any new person entering an eminent professors household be vetted by the appropriate authority?  Anyway, someone like Mr Roland shouldn’t have slipped through the net. You know he’s bad anyway, well more so in the book because Timmy growls at him. In the TV series, Connal just does a very good job of ignoring him.

However I do have to commend Mr Roland’s performance, an actor called Vernon Dobtcheff plays the part of the creepy Roland beautifully.  His disdain for Timmy and lack of patience with George are very convincing. Not to mention the fact that Jemima Rooper, who plays George, seems to be having a lot of fun with the temper tantrums in this roll. Its a very good book for showing off George’s temper and disobedience because she gets wound up so often!

The story only has 25 minutes to play out, and naturally that is never enough detail for us avid fans. I think those amongst you who dislike Julian’s behaviour would appreciate that he gets pushed to one side at the beginning of the adventure as Dick is the one who makes the discovery that sets off the chain of events!

Naturally George doesn’t like Mr Roland because Timmy doesn’t and treats him with contempt and distrust, while the others take him into their confidence about their Latin map. But then this is their second adventure so they may not know any better!

When we meet the artists staying at Kirrin Farmhouse, they are rather… disappointing. Like the villains in Five on a Treasure Island they’re rather comic and don’t feel very threatening. Whether this is a script choice or not I don’t know, but it rather spoils the effect of Mr Roland’s menacing.

Overall its a pleasing episode although towards the end, as with the rest of the episodes, it is rushed in places when it comes to the action. Everything ends well, and Mr Roland gets what’s coming to him.

Again the lack of snow makes a difference in the plot and puts added pressure on the five to sort things out before the bad guys get away. Still I suppose you can’t have it all, can you?