The Mystery of the Missing Necklace 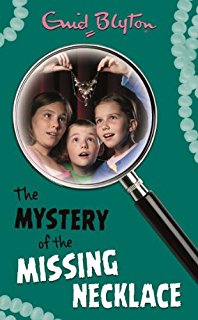 It’s been a while since I favoured you with a Five Find-Outers review, and quite frankly it was because I found it hard to convince myself to keep reading. I just don’t gel with these books as much as the Fives which I read and adored as a child. Also as you know I can’t really get along with Fatty – I am the Goon of the Enid Blyton world in that respect, but anyway, I think its time to see what the Mystery of the Missing Necklace is all about and what its like for those of you who haven’t yet read it. Shall we?

Literally until the last quarter of this book, the whole thing is slow! We start out with no mystery, and the children are almost due to go back to school and they haven’t even had a sniff of a mystery yet and they’re bored. I was as well.

They discover that Mr Goon has a case he’s working on and they’re a bit miffed that their detested Mr Goon has a case to work on and they don’t. They try the best they can to find out what the case is, but Goon isn’t telling (too right!) In the end they decide to go and see Inspector Jenks and try and get him to tell them what the case is because they want to help solve it.

Jenks decides to tell them what Goon is up to but forbids them to get involved because what is going on, a spate of robberies, could turn very nasty indeed. So naturally, this being an Enid Blyton novel, the children ignore the adults and decide to put their sleuthing hats on once more to catch the robbers. However, they have next to nothing to go on, so generally just end up watching Mr Goon to find out something they can go on to try and leapfrog him in this case. These children are bright, I won’t take that away from them, but the problem is that they don’t seem to have much common sense!

That’s a bit of a lie, they do have common sense, oodles of the stuff when they are actually in the middle of a mystery, and solving things, but when they’re trying to find one, especially one that they have been warned off of, they seem to make silly decisions. Now of course they usually involve Fatty ‘having’ to dress up and disguise himself to try and find them a lead, and it must be blooming obvious there’s something going on because a lot of the time the others are hanging around him!

So my Fatty disdain aside, we have Goon puffing and panting around Peterswood on his bicycle, being snapped at by Buster, though this only happens a few times. Once again I am not impressed by Goon’s idiocy. How he even got to me a policeman is beyond me, because he near useless. I used to think that he was just shown up as incompetent by the Five Find-Outers who always seemed to find the mystery  before him! However, no – he just is a little bit… unclever!

We begin to speed up the story a little when the Find-Outers realize that the gang who are stealing all these precious gems and things are using an old deaf man in the village to pass on messages between members of the gang. This old man is appearently always sat on that particular bench every afternoon, so why haven’t we been introduced to him before?! We’re five novels into the series and this is the first time we’ve been told about him, and a stinky little sweet shop where they children and Mr Goon end up staying to observe the old man and the comings and goings of the gang with no real idea how the messages are passed between them!

Eventually it gets figured out by Fatty who dresses up as the old man and pretends to be him so the gang come to talk to him instead. Actually a lot of this book seems to be based on Fatty and his dressing up skills. He even ends up dress as Napolean’s waxwork to spy on a meeting of the gang, but ends up getting caught. I actually dislike how much of this book is about Fatty’s brilliant dressing up, and no, the boasting from the obnoxious boy does not get any less as we go on throughout the series and the others just seem to be encouraging him! I mean honestly!

The quick part of the book comes when the gang finally make an appearence and Fatty gets found out and tied up. Mr Goon shows a particularly nasty side to himself at this point where he leaves Fatty tied up in a cupboard on the understanding that he is a “nasty toad of a boy” who deserves to be in that cupboard. There is also some logic to this because in a way it’s the safest place for him instead of letting him free to run around the criminals and distract the police from apprehending them and maybe getting himself into even more trouble. However Goons main reason behind leaving Fatty in the cupboard is spiteful and not what a responcible adult should do. Inspector Jenks is less than pleased when he find out what Goon did; there goes Goon’s chance of promotion.

It then turns out that the necklace was lost from the arrest because one of the team managed to get away from the policemen. The inspector then invites the children to help the police find the jewels because he seems to believe more in the children than he does in his own officer – which is sort understandable because of Goon’s behaviour towards Fatty earlier on. Anyway, we end up with the Five Find-Outers finding the jewels in the most obvious and at the same time most obscure place for the jewels to be placed. Anyway they find them, and look frorward to the next adventure for the next holiday.

I just wasn’t feeling this book at all, can you tell? I suppose for a child it probably is full of the magic it was intended to have from Blyton’s wonderful imagination, but it’s just not for me. Fatty is getting worse, Goon is his worst yet and the mysery takes so long to get started you just want to give up. I mean to give you some perspective, I started the book on the 26th Janurary and only finished it yesterday! Thats over a month of trying to read it. I just wasn’t engaged with it.

As usual that is probably just my opinion but I am just not getting on with these books at all. Anyone want to explain to me what I am missing?

Next review: The Mystery of the Hidden House

Or we have another review of Missing Necklace, by Poppy, here.

This entry was posted in Book reviews and tagged Disguises, Napoleon, The Five Find-Outers, The Mystery of the Missing Necklace. Bookmark the permalink.

9 Responses to The Mystery of the Missing Necklace