The Enchanted Wood is the first book in the Faraway Tree series, featuring Jo, Fanny and Bessie. The children move to a cottage near a mysterous wood, and in it discover a tree which reaches up to the clouds. It is inhabited by curious creatures like Silky the elf, Moon-Face, The Angry Pixie, a talking squirrel and many more. The top of the tree affords access to weird and wonderful lands, though you don’t often know what’s going to be up there until you’ve climbed the ladder.

The children visit such lands as The Land of Ice and Snow, The Land of Take What You Want and The Land of Birthdays, and get into various scrapes as well as having lots of fun. 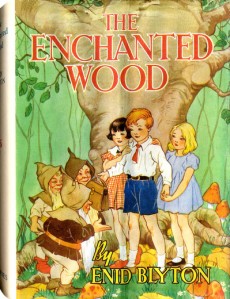 Patrick, Pat, Taggerty is the eldest of the four Taggerty children, and is the ringleader of many fun games and also the trouble they get into. He is tall and strong, and thinks he is brave, but thinks nothing of lying to get out of trouble. He doesn’t work hard at school as he doesn’t like appeasing authority figures. Like his siblings, he doesn’t appreciate his mother until she is injured by a car. After that he tries to shape up and works harder at school, at being honest and taking care of his family.

This entry was posted in Blog talk and tagged August, Faraway Tree Series, Monday, The Enchanted Wood, Those Dreadful Children. Bookmark the permalink.