Unlike the 70s TV series in the books Uncle Quentin doesn’t turn up at the end of every adventure (only a slight exaggeration) to resolve everything. Normally he is to be found skulking around Kirrin Cottage slamming doors and shouting when other people are noisy. I have reviewed the book in general in two parts, here and here but I wanted to have a look at how Uncle Quentin is portrayed and what we learn about him as he has perhaps his largest role so far in Five Go to Smuggler’s Top.

Uncle Quentin will have a big role in Five on Kirrin Island Again but isn’t for another two books yet.

He’s only had a handful of important scenes so far in the series – selling Kirrin Island and putting George in her place about it, catching them throwing the wreck’s box out the window (and sleeping through the retrieval) and promising the children whatever they want at the end of the first book. He is present in Five Go Adventuring Again; mostly arguing with George and even accusing her of damaging and stealing things from his study. He is also briefly in the start and end of Five Run Away Together. This is the first book where he’s really integral to the plot and not just an interfering adult.

A new role for Uncle Quentin

I suspect Blyton tries to ‘ingratiate’ Quentin to us from early on in this book, almost priming him for this new role by including him more, and having him be a little kinder now and again.

When the Five first arrive in Kirrin Aunt Fanny informs them that Uncle Quentin plans to do very little work these hols and join the children on walks instead. This is completely the opposite of what we would expect. It does him good to have a bit of young life around him she says. The children are not convinced, and with good reason based on his behaviour in previous books. Julian privately thinks that Uncle Quentin has no sense of humour and they will be bored stiff all round. George says that Father doesn’t mean to, but he does spoil things, somehow and Anne’s opinion is that He’s not very good at laughing. He’s too serious.

Uncle Quentin himself says I’m quite glad your mother and father are away, Anne, because now we shall have you all here once again!  This is rather laughable based on his much he hates the house being full of children, normally, and the fact that that very evening he roars Shut that door, one of you! How can I work with that noise going on! because a door is banging upstairs. His first statement does, however, serve as a way to mention why they can’t go to Anne’s home after the tree disaster.

Similarly he stays in the lounge earlier that evening, though his inability to play card games means that nobody bothers to start a game. His presence gives Blyton a chance to bring Sooty into a conversation and introduce him to the reader, but I do think it’s also a part of including him more in preparation for later.

The incident with the ash tree falling on the house brings him down a few pegs, particularly as Aunt Fanny points out that it’s his fault for not seeing to getting the ash tree topped before. Uncle Quentin did not look very clever. He looked rather ashamed somehow Anne thinks.

He does get annoyed when Fanny blames him but then calms down when he sees how upset she is. He puts an arm around her, soothes her and promises to sort everything out. She doesn’t really believe him – he has form for being useless with these things, but she lets him away with it at the time as she is just glad for the comfort.

Uncle Quentin was so very clever, and knew so many things – but it was so like him to neglect something urgent like cutting off the tops of the old ash tree. Sometimes he didn’t seem to live in this world at all!

Of course we have seen him terribly worried about his wife in the previous book when she was taken ill. It’s nice to see this affection continued even in a moment of high stress.

He does start to organise things the next day, but he’s back to being rather abrasive. He immediately arranges to send the children to Smuggler’s Top seeing as Mr Lenoir offered to have them. He sees this as a perfect and convenient solution. The children need somewhere to stay and someone has offered to have them. He ignores Fanny’s protestations that they don’t know the Lenoirs or anything about them and that the children may not be happy with the plan. Quentin pooh-poohs her worries and says that Lenoir is a remarkable,  clever fellow as if that is the only important detail. Then he drops the bombshell that Timmy isn’t allowed to go as Mr Lenoir doesn’t like dogs. He just can’t see how that would be a problem – making the above quote about him not seeming to live in this world look so very true. Fanny points out it’s a problem and George throws the promised tantrum but Quentin is not to be moved. He is Quite determined that George should not upset all his marvellous plans.

He, of course, gets his own way, and the children (and unbeknownst to him, Timmy) are packed off to Smuggler’s Top.

But that was not the end of Uncle Quentin

I’m trying to put myself in the mind of someone who has not read this book before. Hard, when I’ve read it literally dozens of times. I think, though, that a first-time reader could easily assume that we would see no more of Kirrin or Quentin. None of the blurbs I’ve seen mention Quentin’s kidnapping.

But he does of course reappear. Despite promising Aunt Fanny he would take care of everything he rather abandons her so he can arrive at Smuggler’s Top! They (more likely he) can’t stand the noise of the workmen at Kirrin Cottage and go to stay at George’s aunt’s house (the exact relationship is not explained). The aunt isn’t very well so Fanny stays with her and Quentin comes to visit Mr Lenoir alone.

He isn’t there long enough to do or say much. He is reportedly tired and cross when he arrives, and annoyed at George because of her behaviour (she is at that time confined to her room because she snuck into Mr Lenoir’s study). He clearly approves of Mr Lenoir’s choice of punishment, though, as he says George ought to stay locked up the next day if she doesn’t apologise.

And then of course, that very night he is kidnapped by Mr Barling. 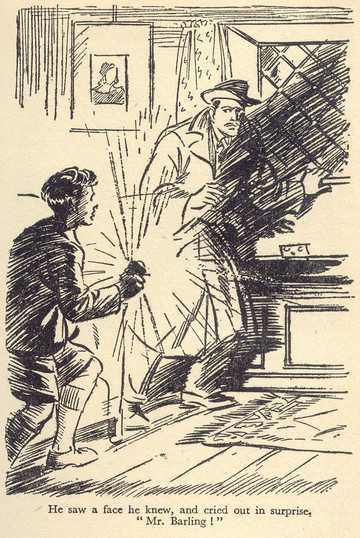 I have already discussed the ambiguity of Uncle Quentin vs Mr Barling in my last post. In short; who is more evil? A man who does a bit of smuggling (and kidnapping) or one who plans to destroy a whole eco-system for profit? OK, probably the smuggling kidnapper but the marsh drainer doesn’t exactly cover himself in glory with his plans.

Mr Lenoir and Uncle Quentin are rather two of a kind.

Mr Lenoir can’t get it straight that George is a girl, not a boy, despite being told there were two boys and two girls coming to stay. He also thinks that Julian is Quentin’s child. Of course being George’s father Quentin doesn’t make that mistake, but he has similar lapses in memory such as when he can’t get Berta/Leslie/Joan’s name right in Five Have Plenty of Fun.

Both men have dreadful tempers, too. They shout, they slam, they threaten. They don’t like talk and noise at mealtimes.

Neither has the best relationship with their children, though I suspect much of it in the Lenoir’s case is because Sooty is his step-son. He appears to be much better with Marybelle, though even she is frightened of his tempers.

By the way, my stepfather is always very affable, always smiling and joking – but it isn’t real somehow. He’s quite likely to fly into a furious temper at any moment.

Mr Lenoir lives up to this readily. One minute he is laughing and joking with the children. Then suddenly he becomes serious and starts warning Sooty about not taking silly risks on the city wall. Sooty (quite politely) argues back and Mr Lenoir loses his temper very quickly.

“Enough!” snapped Mr Lenoir, and the smiles and laughs he had so freely lavished on everyone vanished, entirely. “Get out, all of you!”

Uncle Quentin is not quite so mercurial, nor sinister but he is prone to sudden outbursts if his work is disturbed.

Much like Uncle Quentin’s softer moment at the start of the book[link], Mr Lenoir is not bad all the way through.

Mr Lenoir put an arm around his wife and kissed Marybelle, suddenly appearing very much nicer than he had ever seemed before. “Don’t worry,” he said in a gentle voice. We’ll soon get to the bottom of this, if I have to get the whole of the police force in.”

Uncle Quentin has a second softer moment or two  when he comforts Sooty thinking he is Julian or Dick.

The man thought vaguely that it must be Julian or Dick. He put his arm around Sooty and dragged him close to him. “It’s all right. Go to sleep,” he said. “What’s the matter, Julian? Or is it Dick? Go to sleep.”

Perhaps it’s only because he is drugged – but that’s perhaps not what you’d expect from Uncle Quentin. 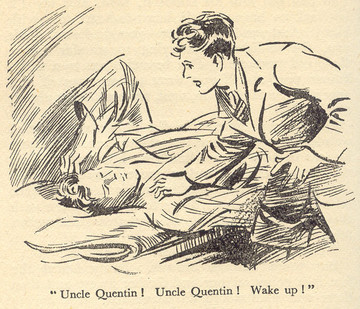 Being only in one book Mr Lenoir has a reasonably simple character development. He starts out angry and foreboding and ends up a lot more reasonable. (I wonder how ‘bad’ he really was, and how much was Sooty’s interpretation of a difficult relationship with a step-parent).

Uncle Quentin is in several books and has a varying relationship with the children, going from stern disciplinarian to furious scientist to caring relative and back at least a few times.

As mentioned in my previous post, Uncle Quentin saves Timmy’s life at reasonably serious personal risk at the end of the book. Again, this might be a little surprising given how cavalier he has been about Timmy’s well-being before. (Making George get rid of him before the events of Five on a Treasure Island, making her keep him outside in the snow in Five Go Adventuring Again for example.) 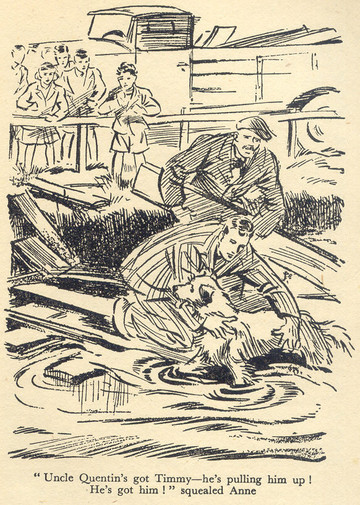 Mr Lenoir also finds it in himself to be kind to Timmy and allows him to stay at Smuggler’s Top in the end.

Overall, though, we see many more facets of Uncle Quentin’s character here. I will have to revisit him in detail when I get to Five on Kirrin Island Again, as we get a deeper look into his relationship with George in that book.

So what do you think of Uncle Quentin? Irascible and impossible scientist or a hard-working and misunderstood family man?

This entry was posted in Characters and tagged Five Go to Smuggler's Top, The Famous Five, Uncle Quentin. Bookmark the permalink.

3 Responses to Five Go to Smuggler’s Top part 3: a focus on Uncle Quentin