The Secret Series covers through the years

I recently looked at the different covers used for the Famous Five books and The Adventure Series.

It’s not unheard of for a series to have different artists doing the covers, for example the Find-Outer books had three artists across fifteen books, but for only one artist to return must surely be an anomaly?

Anyway, let’s see how they all look.

I think the first and last are reasonably similar in style and colour palette, and the remaining three are somewhat alike too. Spiggy Holes probably stands out a bit with it’s very bold colours and I’ve seen several people mention the incongruity of the moonlit background and the sunny foreground!

As I said in a previous post (link) Armada published a lot of the first paperback editions of Enid Blyton books. In The Secret Series case, Armada did four runs of paperbacks, all in very different styles.

The first ones had covers by Mary Gernat and are what I think of as typical Armada covers. They tend to have the title in the top right or left corner, with one or two words per line so rather than all in a row. They also generally have a fairly solid background colour. Even though there are several different artists on these covers they still feel like they all belong together.

Peter Archer then did two different runs of paperback covers.

The first ones are of a style also used for the Adventurous Four, Six Cousins, The Naughtiest Girl and probably many more besides. They have the book’s title in the middle, taking up two lines, Enid Blyton’s signature below and the Armada logo above. 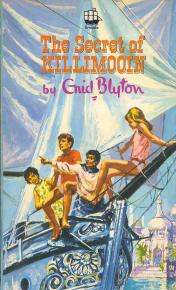 I have no idea where the fancy ship comes from on Killimooin!

The second set remind me of the 1993 Award Famous Fives, though each one has a different colour border and only one is yellow. 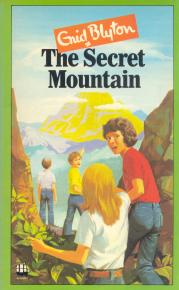 The last Armada set is by an uncredited artist. These make me think of jigsaw puzzles or board game boxes, perhaps due to all the Secrets, or rather S ⋅ E ⋅ C ⋅ R ⋅ E ⋅ Ts that runs around the edge of the cover. These have a mode modern and cartoony look with the scenes being viewed from some unusual angles. 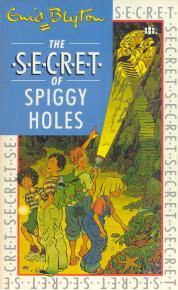 Not covers that have won awards (that I know of) but rather covers on books by Award Publications.

The first Award set have covers by Dudley Wynne (and internal illustrations too). These have a boxed illustration, and a coloured border which extends up behind the title. 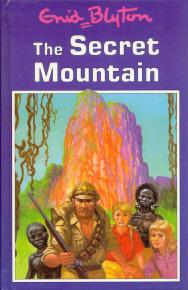 Spiggy Holes is red and Mountain yellow, so it strikes me as odd to have the three others so similar in colour. They also suffer from a lack of continuity with the titles. Secret should be small on them all (in my opinion!) as of is such a small word it doesn’t have a huge impact on the layout of the titles.

The next two have uncredited covers by the same artist. These are interesting as it is clearly the same illustrations used for both sets, but most have one or two small differences as well as being a close up. The book titles obviously change too, the first set being inconsistent with colour and layout, the second having added purple banners and a logo.

Take a look at the girl in pink on the cover of The Secret Island. The first time she has bare arms and the later cover her top has long sleeves. On the Spiggy Holes cover both the boys’ backpacks change colour. Mountain has Ranni’s (or is it Pilescu’s?) gun change into a walking stick. I can’t see any changes to Killimooin, but the moon has been moved on Moon Castle.

And the last Armada lot have covers by Val Biro, the author and illustrator of the Gumdrop the Vintage Car series. I used a copy of The Secret Island from this set to do the comparison against the original.

These are quite nice covers, I think. They are not too modern or cartoony. The only flaw is this is when they renamed The Secret of Killimooin to The Secret Forest!

The latest versions for the series are from 2016. They are by Hodder and have covers by Sarah Warburton. The obvious thing about this set is that there is one book missing! The Secret Mountain has not been republished, and probably won’t be again until Blyton’s work enters the public domain in 2038.

While these are quite striking with their greyscale textured backgrounds I’m not sure they’re a great fit for the series. They make the books seem quite dark and depressing, which they are not. In addition, The Secret Island looks like an epic about children lost at sea, while Spiggy Holes could be mistaken for a sci-fi adventure about a wormhole.

What I think is always interesting is looking to see if the covers feature the same scenes. On the whole, these do.

The Secret Series has 8/9 books with children in a boat, Spiggy Holes sees 6/9 covers of children shining torches up cave-stairs (and two of boys climbing ropes), and 8/9 Moon Castle books have the children outside with torches.

Mountain has a bit more variety, but 5/8 covers still have the children walking/climbing towards/up the mountain. Killimooin/Forest has 5/8 covers of the children on horses though on different parts of their journey so they look more unique.

So, what covers do you like? My favourites are, of course, the originals, (though it’s a pity there is such a variety of looks in just five books), yet I have a certain fondness for the first Armada set too.

2 Responses to The Secret Series covers through the years