I didn’t mention the Curtons at all in part one of my review, very remiss of me!

Martin and his father are staying in a cottage belonging to the coastguard. Martin, as seen through the eyes of the Five, is a slightly curious boy. He is quiet and rather sullen, difficult to get along with beyond polite small talk. He does, however, ask George a great deal of questions about George’s island and her father’s work there. Somewhat foolishly she tells him a fair amount, flattered by him mistaking her for a boy. Dick is not so easily taken in and has a couple of disagreements with George over Martin’s interest.

His father seems genial and jolly, inviting the Five to come and watch television with them – the first time George has ever seen a television – but when the Five are not there he displays a terrible temper and is unkind to Martin.

When Mr Curton reveals that he is newspaper journalist Dick relaxes, thinking that Martin was merely assisting his father with a story. But this is a clever red herring.

A bit more about Uncle Quentin

I looked at his relationship with George last time, but there are lots of other bits about Uncle Quentin, particularly his terrible memory and lack of attention when it comes to anything other than his work.

Apparently he has been terribly excited and so thrilled lately, so says Aunt Fanny. I wonder how he displayed that, I can’t quite picture him skipping around Kirrin Cottage no matter how excited he was. Perhaps she just meant he smiled a lot!

He does not look after himself at all well while staying on the island. He forgets that Fanny and the Five are coming to visit despite it being written in his diary. He wolfs down the picnic Aunt Fanny has brought – he clearly hasn’t been eating regular meals while working. Fanny had even left him soup, which he had forgotten about.

What’s more is he tries to eat the soup a few days later and has the cheek to complain that it was quite bad. Aunt Fanny had clearly anticipated this and already told him to throw the soup away, before it went bad.

Aunt Fanny also relates the brief story about the time Quentin was working in the Cheddar caves.

I remember once when he was doing some sort of work in the stalactite caves at Cheddar, he disappeared in them for over a week – but he wandered out all right when he finished his experiments.

There probably isn’t much more to the story than that but I find myself wanting to know more. Had he gotten lost? Did he just find a place to work that nobody thought to look? Did anyone even bother going looking for him? Anyway it pretty much sums up Uncle Quentin, totally absorbed in his work. I bet if a recue team had made effort to find him, and interrupted his work he would have been very angry!

I have to say though, that he is quite heroic in the end. He does everything he can to keep his work falling into the hands of the bad guys, and is willing to die in the process. His dash to his tower to destroy the power supply and therefore prevent the blowing up of the island is also impressive and exciting. 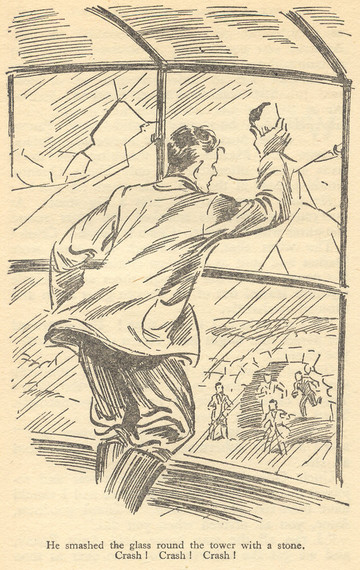 George’s desire to be treated as a boy is often merely an interesting facet to her character, popping up now and again. But sometimes it becomes important to the storyline, for example when her ambiguous gender confuses adults and causes them to miscount the children (like at the end of Five Go Off in a Caravan).

This book has only the one important plot point regarding George being mistaken for a boy, by Martin, – and I’ve mentioned that above. The bad guys also mistake her for a boy towards the end, though it doesn’t have any impact on the story.

There are several instances where it was mentioned, though, and a couple of little things in relation that I picked up on.

Julian praises her for giving in gracefully, adding you’re more like a boy than ever when you act like that. Perhaps he just wanted to say something complimentary to her, or use that comment as a way to encourage her to sulk less, but Anne takes a bit of offense. Her reply is it isn’t only boys that can learn to give in decently… heaps of girls can. And she’s quite right.

George does seem to have some strange ideas about girls, mind you. She doesn’t want to be petty and catty and bear malice as so many girls did. Her ideas about boys aren’t always much better.

When Dick calls her out for spilling everything to Martin just because he mistakes her for a boy he says Jolly girlish-looking boy you are, knowing that will offend her more than most other insults. George’s reply is magnificently silly.

I’m not girlish-looking. I’ve got far more freckles than you have, for one thing, and better eyebrows. And I can make my voice go deep.

Dick is suitably disgusted with this logic, and ends with the accusation that Martin was just playing up to her, knowing how much you like playing at being what you aren’t. Ouch! George was being pretty daft but that was rather cruel a comment from the usually affable Dick.

Little things I noticed were James calling George Miss twice instead of master, and the fishermen doing the same.

The usual nitpicks, comments and observations

This is the first adventure for the Five since they went caravanning the previous summer, and it is also the first time the children have all been together since then, too.

There are two major(ish) continuity errors in this book. One is the already mentioned room in Kirrin Castle which has collapsed in Five Run Away Together but is perfectly fine now. The second is that Alf, the fisher boy, is now called James. It is definitely meant to be the same character as his relationship to George and Timmy is mentioned.

Aunt Fanny somewhat foreshadows the start of a later book when she says whoever heard of bathing in April? Do you want to be in bed for the rest of the holiday with a chill? Of course at the beginning of Five Have a Wonderful Time George is delayed from joining the others because she has been bathing in April and has caught a chill.

I have to adjust my mental pictures of the locations quite often when I’m reading and notice details or descriptions don’t match what’s in my mind. Kirrin Cottage is said to not overlook the island well, so George struggles to look for Timmy with field-glasses and they have to go upstairs to watch for Uncle Quentin’s signals. This somewhat contradicts the fact that in Five Run Away Together George asserts she has seen a light on her island. It also doesn’t match my mental picture of Kirrin Cottage being quite near the beach and looking directly over the island.

Talking of misunderstanding things, I tend to forget that Uncle Quentin prevented the explosion. I think I confuse it with the end of The Island of Adventure when the mines and undersea tunnels are blown up, and end up thinking that the same happened to Kirrin. I even went as far as drafting a Travel Blyton Kirrin post where I mentioned the former undersea tunnel.

I find it strange when both Joanna and Aunt Fanny keep calling Uncle Quentin The Master. I always think of Joanna as almost part of the family, rather than a servant. She’s obviously staff, but she’s not part of a large household where servants were supposed to sneak around the back stairs without ever being seen.

And lastly, when I first read this I had no idea what sou’westers were. I imagined them as a sort of jumper or sweater – mostly because sweater and sou’wester share a lot of letters, and is something you might wear on a cold, wet day.

Despite enjoying the Kirrin setting and the neat addition of the undersea tunnel this book is only in 14th place in my series rankings. I think there are a few factors which lower my opinion of the book. One is that the enemy is revealed/met so late, and it’s only George and Uncle Quentin who feature in the bulk of the final scenes. Mr Curton is never a real threat to the children despite his involvement and Martin is neither horrible enough to be disliked or nice enough to garner my sympathy. I do like his little backstory and the stuff about the painting but it’s not really enough for me to feel like I know him as a character.

The other is the frustration of having a Kirrin adventure where the island is mostly off-limits. The same could be said for Five Go Adventuring Again, but the constant tension of Mr Roland at Kirrin Cottage and the exploring of Kirrin Farm make up for it.

I do like the introduction of the (never seen again) coastguard, and the quarry, but I feel like this book misses out on some of the things I like best about the Famous Five books. The glorious picnics, lazy days on the beach, exploring their location together, the Five alone facing their enemies.

It’s still an excellent book, just not as excellent as thirteen of the others!

We also have an alternative review of Five on Kirrin Island Again by Corinna.

This entry was posted in Book reviews and tagged Five on Kirrin Island Again, The Famous Five. Bookmark the permalink.