The Naughtiest Girl in the School: How has Blyton’s original text fared in a modern edition? Part 3

I am comparing the 1944 5th reprint by George Newnes (which should be more or less identical to the true first edition) to a 2012 edition by Hodder and Stoughton. 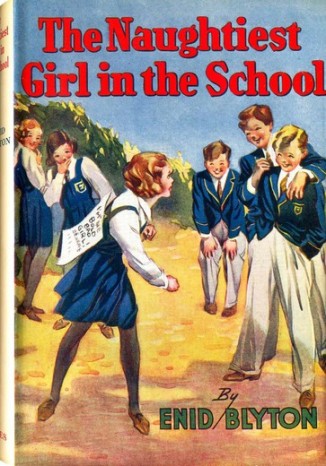 The editor must have fallen asleep during this chapter as not a single thing changes. To be fair there isn’t very much I would have seized upon as a potential for updating but all the italics are left alone as is the record on the gramophone.

Despite all the italics being left in the previous chapter, several are removed from this one.

There are two queers in this chapter. One becomes odd, the other very queer people, is left alone.

Also left is a reference to two shillings. If you’re going to update a book at least be consistent!

The original book has the chapter title repeated on odd pages and the book’s title on even ones. Strangely in this chapter the title loses the capital P on the odd pages.

One change I approve of is the removal of silly capital letters. It’s always the Meeting in both, but the meeting is talked about as if it’s a live entity the Meeting hates and so on. Whereas there’s really no need for the box they put the money in to be called the Box. So I approve of it become plain old the box.

More money is changed. Queenie asked for half a crown (two shillings and sixpence) to buy a present for her old nurse’s birthday. Whether you rely on converting two shillings to pounds or consider that she’s asking more a bit more than her weekly pocket money, the new amount should be two pounds fifty or thereabouts. But no. She asks for one pound. How is she supposed to buy a present for a pound? And if all she needs is a pound why can’t she just spend half her pocket money?

John Terry’s request for a spade is originally priced at twelve shillings and sixpence. A considerable amount at over 6 weeks pocket money. This has been updated to five pounds, less than three weeks money. Five pounds seems rather cheap for a spade, especially when John has made a point of saying how expensive it it. Why isn’t it ten or twelve pounds?

Lastly italics are removed from the first of two italicised words in the sentence Lessons you don’t seem to like, you must miss those you do like.

Italics are attacked inconsistently again. In one case where only half a word is italicised the italics are extended to the whole word I want everyone to I want everyone. The two more or less mean the same so changing it is pointless. But later however is left half in italics.

Also left is I shall have a few pence over for sweets. You wouldn’t get many sweets for pennies even back in 2012. I remember buying individual penny sweets in high school, but by the time I left (2004) it was mostly two-penny and five-penny sweets. (I shudder remembering the little tray with the sweets on it on the shop counter, and how many fingers must have touched the sweets before anyone bought them!)

Also in this chapter I first noticed the full stops have been removed from abbreviations like Mr.

This is the only chapter with an illustration for the paperback, but it’s a different one to in the original. Cable depicted Nora speaking to Elizabeth who is in bed, the French mistress praising Elizabeth for good work and Elizabeth raging at the boys who are teasing her.

Hindley shows Elizabeth stuck inside at her desk while her class sketch outdoors.

I’m struck by just how pointed everyone’s shoes are. Can Hindley not draw shoes, but just does crude triangles?

Some things are changed more than once, but they are the same change and only get counted once:

Unique changes (some of which will move to the above list if I see more examples later):

2 Responses to The Naughtiest Girl in the School: How has Blyton’s original text fared in a modern edition? Part 3