Fan fic Friday: Cunningham and Petrov: The Mystery of the Missing Aeroplane chapter 7

Previously Bill went up to Gairdon to collect Philip, and then they set off in a plane to Austria. 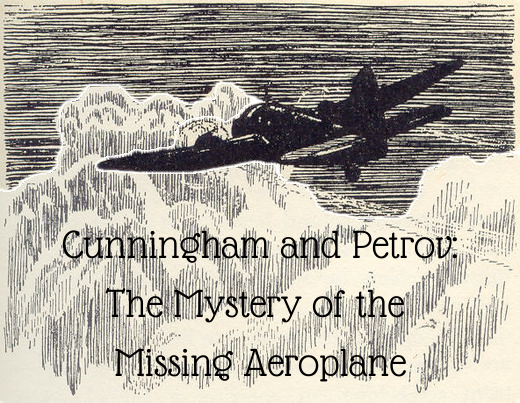 Almost trembling with excitement Anatoly packed his things, paid the landlady and went to see if he could catch a lift out of  town in the right direction with some of the farmers moving about after delivering their wares to the scattered villages.

He managed to find himself a lift in the right direction and paid the farmer handsomely when he was taken as far as possible. He slipped down off the cart, checked his compass and set off at a fast walk towards where he knew the airfield was.

He was the first one to arrive, and he settled down in a corner, to have a rest and wait for Bill’s planes to land and the other agents who could make it to the allotted meeting point, to join him.

From the message he had received he was expecting Bill to arrive by four, four-thirty at the latest. He wasn’t too concerned when it reached five pm, but when the clocked ticked on to six he was slightly worried. Two other agents had arrived by then, and they sat together pensively, wondering what had happened to the promised pick-up.

“Do you think they will come?” Anatoly asked.

Thompson shrugged laconically. “Might have been a change of plan. Maybe they decided to head straight to the valley instead of wasting time diverting to get us. We’ll just have to wait and see.”

“We’ve got a wireless set up,” Smith reminded him. “A message will come through sooner or later. Hopefully sooner, I’ve been bored out of my mind this past week. I could do with some action even if it’s just making our way back home.”

Anatoly nodded though he began chewing on his thumb nail. He didn’t want to tell the others what he had found out, in case Bill didn’t want it shared. He got up after a moment and wandered around the hanger for a moment, his nervous energy getting the better of him. As he went to the front of the hanger he thought he heard the sound of an approaching engine.

His heart rate picked up as he scanned the sky, spotting the white underbelly of a plane. He watched it circle lower, shading his eyes from the sun which was sliding down in the sky. As it approached for its landing he caught sight of the insignia on the tail, the markings on the sides, and realised that it was not Bill’s plane.

Smith wandered over, taking out a cigarette. “Is it the boss?” he asked, as he lit his cigarette, and offered Anatoly the box.

“No,” Anatoly replied despondently, taking a cigarette. He stuck it in his mouth and then took the box of matches, striking one and holding it to the end of the cigarette until it caught. Shaking the match out he discarded it and handed the box back. They turned away as the plane touched down, heading back to their little corner. “I wish I knew what was going on,” Anatoly said. They were under instruction to only radio in at their prescribed times unless there was an emergency or information of utmost importance had come up.

“Don’t we all, mate,” Smith replied. “The boss’ll have his reasons for leaving us high and dry. We’ll get orders eventually.”

Anatoly nodded and sucked on the cigarette. “I wonder if there is any food in this place,” he added as his stomach rumbled. “I was in such a rush to get here, I forgot to pick up supplies.”

They managed to scrounge a meal from the hut, but it wasn’t up to much, and they bedded down for the night amongst some bushes near the perimeter fence, taking it in turns to keep watch although they knew a plane coming in to land would wake them.

In the morning the rose, washed and shaved as best they could at the cold water tap outside and resumed waiting.

A small plane landed just past eight, and they kept well back out of the way. And finally, at half-past nine, two medium aeroplanes with a familiar look circled, and came into land.

The door to the nearest plane was flung open and the stairs lowered. They watched keenly as Bill appeared in the doorway and stepped out.

“Smith. Thompson,” he said, nodding at the two men. “Petrov.” He nodded at Anatoly too.

“Yes, sir!” they all replied, knowing better than to ask why they were so late. The just crossed the tarmac quickly and boarded the plane. There were five other agents on board, Bill making up the sixth as he re-entered the plane and raised the stairs again.

Anatoly was surprised to see Philip Mannering aboard, his hair tousled and clothes untidy. “Philip,” he said, nodding by way of greeting.

“Anatoly,” Philip replied with a grin. “Ready for some action?”

“Always,” Anatoly replied. He thought about sitting next to Philip but decided against it. He was already seen as the baby of the SIS and didn’t need to cement that reputation by chatting away to a fourteen year old.

“Well, gentlemen,” Bill said above the engine as it started up. “Shall we get this done?”