Five on a Hike Together part 2

Last time I left off just as the Julian decides that they are going to visit Two Trees and Gloomy Water to see if they can find Saucy Jane (but avoid Maggie who Knows).

We are a little over halfway through the book by now, and yet we are only just at the part where the real adventure begins.

That’s not to say the previous chapters have been boring or eventless, but apart from the strange message in the night it hasn’t been adventurous.

But now, we get to see the places from the message Dick was given. Two Trees is slightly sinister burnt out ruin and Gloomy Water is exactly as it sounds from the name. I’m stuck with some strange mental images having formed them when I was a child and reading this for the first time and they’re hard to get rid of.

Firstly the two trees are palm trees in my head (no idea why – I did know it was England and not the tropics!) and Gloomy Water is annoyingly small and bordered by a ridiculously even line of shrub/hedges.

As they were not prepared for camping they end up in the cellars – and I’m absolutely with Anne that having lots of other doors and rooms down there is more than a tad creepy.

Quickly the hunt for Saucy Jane starts – she’s not in the boat house, so where else could a boat be?

This is the first time I’ve really thought about the history of the house and the boats. Merry Meg, Cheeky Charlie, and Careful Carrie. Were they named after some of the people that lived at Two Trees? (Also why are three alliterative but not the fourth?) Blyton uses Saucy Jane as the name of the narrow boat in The Saucy Jane too, but I’m not sure if it’s a common boat name or not.

I definitely felt a pang or two reading about the little boat house and the boats with the cushions and everything just mouldering away.

An adventure becomes more adventurous when the baddies show up. Dick never got his message but obviously Maggie sought him out and let him know.

They naturally turn up to do some treasure hunting themselves and are not happy to find the Five right in their way. They attempt to be threatening and menacing but are unarmed and therefore easily held off by Timmy. We know Dirty Dick can be violent and dangerous from our earlier meeting with him, so there is an air from him, but otherwise he and Maggie are not the toughest enemies the Five have faced. 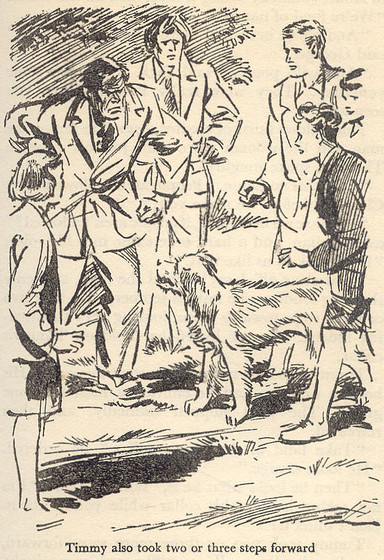 They do steal the Five’s food in an attempt to get rid of them, but Timmy just steals their food in return, and there is an incident where Dirty Dick rows their boat into the Fives’ raft but other than that it’s fairly conflict free. Dick and Maggie think that as the kids have to be back at school on Monday they can just wait it out – of course they have no idea that the Five know about the hidden loot and have all the clues to find it.

The Five find the loot first, but it’s actually a close call. Dick and Maggie are obviously smart people even if they don’t look it because they work out the clues and are extremely close to finding the right spot on the lake themselves. They are hampered by there only being two of them, though, and having the children so close they don’t want to give anything away.

So it’s a moonlight dip for the boys to recover the loot and outwit Dick and Maggie.

Nitpicks, observations and other comments

As always I noted various things that seemed like contradictions, curiosities, plot holes and so on.

This entry was posted in Book reviews and tagged Dirty Dick, Five on a Hike Together, Gloomy Water, Maggie, Saucy Jane, The Famous Five. Bookmark the permalink.

11 Responses to Five on a Hike Together part 2