If you like Blyton: The Adventurers and the Temple of Treasure by Jemma Hatt

I recently read, or should I say listened to the first Adventurers book; The Cursed Castle and reviewed it. I was sent audiobooks of the first three titles in the series on audiobook by Jemma Hatt herself, in exchange for honest reviews. So here’s the second one!

We are back with Lara, Rufus, Barney and Tom who has come to stay for the holidays.

Mrs Jacobs is neatly gotten rid of in the first few minutes – she’s back off to Egypt due to a work situation. Just before she gets the call summoning her to Egypt she has told the children that there’s a visitor on their way. The visitor turns out to be Lara’s Uncle Logan, who becomes responsible for the children (and Barney).

Logan is hard to describe. I can tell you what he is not – responsible, sensible, punctual, honest… He gets his own niece’s name muddled up and falls for Rufus’ joke that his name is Joe King. He was a TV star, with his own Bear Grylls-style show but it’s made clear that he’s actually rubbish at survival skills.

Also in the story is Dee, who is a sort of girlfriend of Logan. She’s quite a bit more sensible than Logan but somehow lets him drag her into all sorts of trouble. 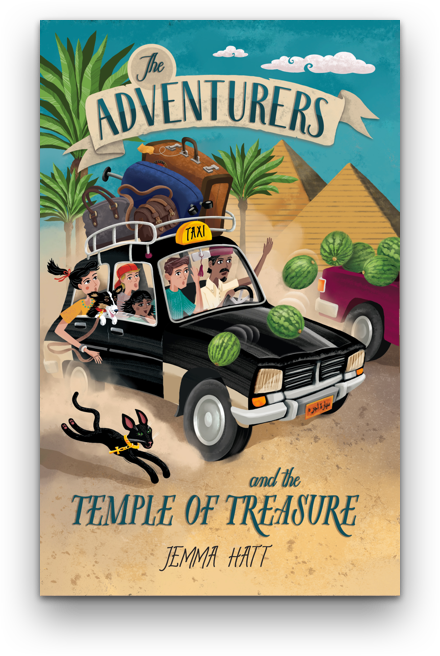 In the last story they found an Egyptian treasure under Kexley Castle in England. This time, after looking through some of Lara’s father’s belongings which Logan had, they discover clues to a treasure in Egypt and very quickly are off on Dee’s private plane.

I admit I found this part rather hard to believe, but it’s probably very hard to have three children and a dog fly to Egypt on a whim and have it come across as realistic. Firstly Tom, who has travelled from Cornwall to London handily has his passport with him (why? other than the plot demanding it of course). And secondly Rufus tells the airport staff that they submitted Barney’s travel documents on the online portal which is a lie (who knows if there even is an online portal as he made it up), and they are just allowed to travel. What is far more believable is them bribing the authorities at the other end. I’m not sure authors can win in these situations, though. If no mention had been made of needing passports or that dogs need documentation to travel I’d have been asking ‘what about’, but raising the issues and solving them with solutions like these also rankles. I don’t expect it will bother child readers, though.

Blyton regularly got away with ignoring problems like these as she was writing in the 1930s-60s and although she perhaps exaggerates the laxness, air travel was nowhere near as regulated as it is now. 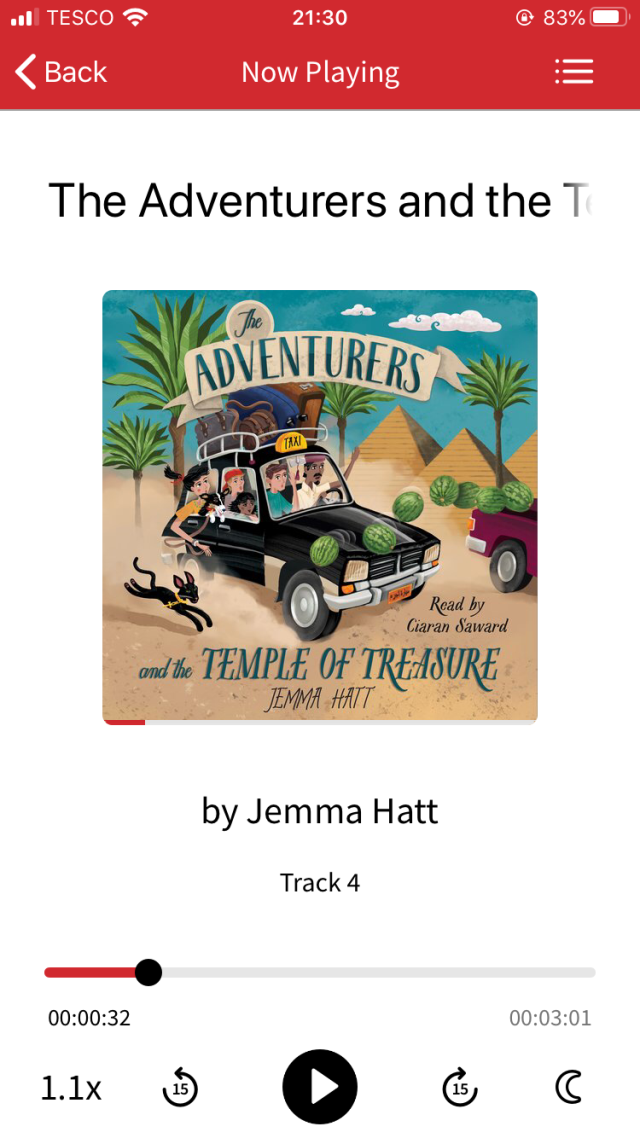 Anyway, they arrive in Egypt and talk to Lara’s father’s contact in a museum. He warns them that a gang is also after the treasure and they immediately find themselves being followed.

They are followed all the way through the book as they move from place to place following the clues to the treasure. At one point they are saved by Maye (Karim’s sister), I found that a bit too coincidental. There are 98 million people in Egypt and they just happened to be rescued by a sister of a friend?

Maye follows them onboard an overnight train and although Dee isn’t happy Logan is too laid-back to send her away.

They hire a boat – we get quite into River of Adventure territory for a while (with the addition of a scene with a crocodile!) – and they find the person they’ve been hunting for. I love that it turns out to be a woman when they assumed it’d be a man. Unfortunately ala River of Adventure the adults are all kidnapped by the baddies and the children are left to fend for themselves.

Having seen the map belonging to the woman (I have completely blanked on her name – this is the one problem with audiobooks, it’s not so easy to make notes!) they decide to continue searching for the treasure and find themselves in another National Treasure worthy underground adventure. If these books were ever adapted for TV or film these chapters would make excellent viewing.

The final chapters are very tense as they uncover the treasure but realise that the baddies are not far behind them.

I didn’t enjoy this quite as much as the first one. I found the contrivances of their travel plans and running into Maye drew me out of the story, and I felt Dee and Logan were present for too long. I much prefer it when they get rid of all the adults! (Neither Dee nor Logan were particularly likeable, actually, though Logan redeemed himself rather a lot at the end.)

The baddies are a bit vague, a nameless, faceless gang, but they are fairly sinister too as they are always just a step or two behind the children.

I said for the last book that Barney seemed to be forgotten sometimes and was an after-thought at others, but he’s far more present in this book and much more of a character.

I felt this book got better as it went on. The beginning was fine if unbelievable at times. I liked that we got a bit more information about Lara’s father. Then their travels through Egypt were good despite Logan and Dee. The strongest part of the book was definitely the last chapters – Jemma Hatt seems to have a real strength for writing and describing clues and puzzles, she makes it all very tense then just keeps ratcheting it up as the baddies descend and make it all ten times more dangerous.

As before the narrator was Ciaran Saward and so it was a pleasant listen at normal speed for me.

This entry was posted in Audio Books and Audio Dramatisations, Book reviews, Other Authors and tagged If you like Blyton, Jemma Hatt, The Adventurers, The Adventurers and the Temple of Treasure, The River of Adventure. Bookmark the permalink.