The Six Cousins covers through the years

It has been a while since I have looked at book covers, but I was looking for something reasonably quick and easy to write this week and the Six Cousins seemed to fit the bill. There are only two books in the series, and six editions of each, so that is only 12 books to comment on!

Although there are only two books, the first edition dustjackets (and internal illustrations) were done by different artists.

The Six Cousins at Mistletoe Farm was by Peter Beigel. This appears to be his only Blyton work if you click his name in the Cave of Books but I know that shows only first editions. It’s possibly that he has done work for later editions of other books, but his name is not familiar to me. 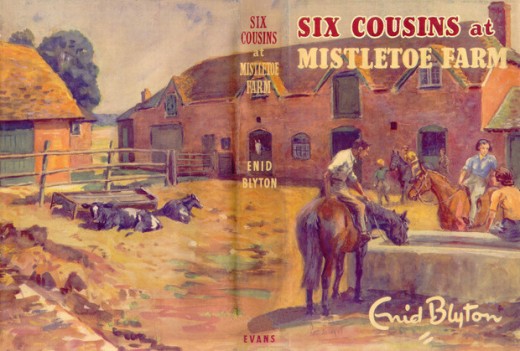 Both books have lovely wrap-around artwork on the covers, depicting life on a farm. I’m not sure the two really ‘go’ together as a series, though. The two artists have slightly different styles, with Tulloch using brighter, bolder colours. The first book looks very autumnal with the reddish-browns of the farmhouse and the yellows of the straw-filled yard, while the second is more spring or summer with the lush green of the grass and the blue of the sky.

I like them both but I’m more drawn to the brighter colours of the second book. There’s something a bit Find-Outerish about the back of the cover. It looks rather like Goon interrogating Old Nosey in The Mystery of the Spiteful Letters. (In the book we only see Fatty visiting Old Nosey, but Goon might have as well). The first book, although attractive for its now-vintage appeal, doesn’t really convey anything about the story other than it being set on a farm. The second at least hints at some intrigue with the police and gypsies.

Armada had quite a monopoly on Blyton books in the 1960s, publishing the first paperback copies for a lot of series and stand alone titles. For the Six Cousins, Armada produced four different sets of paperbacks.

The first set, from 1967, are by an uncredited artist, or possibly uncredited artists. I would guess that these two were by the same person, but I couldn’t say for sure. The first has the more typical Armada font – the one that has just a hint of Wild West saloon about it – and off-set title placement. The way the characters are drawn is loosely similar to those in the Secret Series – particularly the black outlines – so perhaps a suggested style by Armada, or just the same illustrator?

Both are quite dynamic with the cast about to run off the cover, it’s interesting how both have the foreground characters leaning at the same sort of angle! 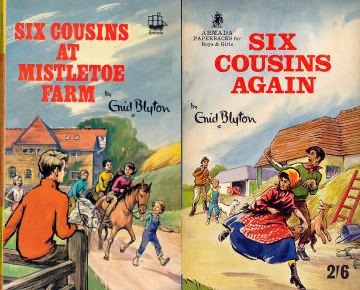 The second set are also by an uncredited artist. Again, I’d say the same artist did both, but it’s not the same one from the previous set as these have much softer colours, and no outlines. I think the second book here, although the font is very different, has a more Armada-like feel to it. It’s possibly the single-colour background which is very common on Armadas. The other would probably look more like the iconic Armadas if the title was off to the left like in the one above.

If it wasn’t for the somehow sinister looking trio in the background of the first book it might have been quite a full cover – though the three in the front are managing to convey a lot of joy in horse riding. The second has a little more intrigue, suggesting the two children are doing a little bit of spying.

The third Armadas move away from the typical 60s style altogether. Coming out in 1980, these also have an uncredited artist. My guess would be that these, again, had the same new illustrator.

I know that the differing title lengths would mean the box might not be the same size on both books, but it baffles me when they don’t make books in a series as similar as possible. It may be that the second one has merely faded, if not, why choose a different shade of yellow? And why have the Enid Blyton signature above the title on one, and below on the other?

The clothes have also been updated in these to have the children in jeans (despite Jane in particular always wearing jodhpurs).  They also aren’t very interesting covers, showing more farm chores than anything else. 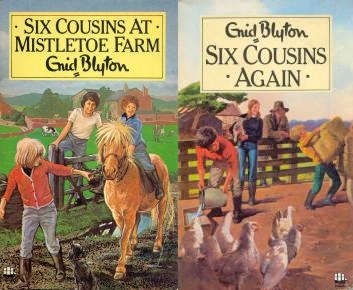 And then our final Armadas are probably the worst of the bunch. The titles with the exaggerated capitals and the ears of corn make them look like cosy picture books. The first isn’t terrible, though there are definitely some odd fashion choices (and still no jodhpurs). The second book… well. Every time I see it I think I’m looking at A Christmas Carol. Despite the flaming pudding it’s so dark, and looks right out of the 1840s, not the 1940s.

No award for Award

Well, if I had to give an award it would be for blandness. These are the most recent reprints and are from way back in 1992 – I was about to say that’s twenty years ago but I’ve rechecked my maths and it is THIRTY years ago now.

They both look like Ladybird books for young children, about children playing on a farm and learning to ride or perhaps competing in a show. Both are scenes from the books, but the jolly events combined with the soft colourings definitely don’t do the stories justice. 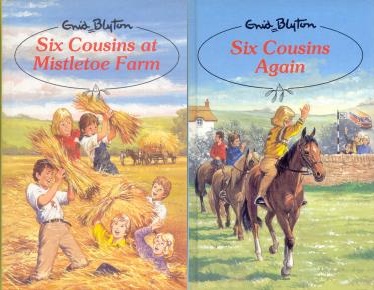 I didn’t actually have either Six Cousins books as a child, I only discovered them as a grown up and now have two dust jacketless hardbacks.

I will probably always choose first edition just jackets as my favourite – the only exception normally is if there has been a second set of dustjackets done as with the Adventure series and the Famous Five. I can appreciate some of the early Armadas, probably a nostalgia thing as they often do have a similar style to ones I had as a child, but after that it’s generally all downhill.

1 Response to The Six Cousins covers through the years