It has been a long time since I’ve done one of these (over a year, actually!), but here are the search terms that have caught my eye lately.

I always try to (very belatedly) answer questions that have been asked in the search terms, especially if I think that the answer isn’t already on the site!

What is Miss Grayling in Malory Towers’ first name? She doesn’t have a first name given in the books (not in Blyton’s ones anyway, it’s possible that the continuations by Pamela Cox have given her a name, but not in the first couple) and she is also just Miss Grayling in the new TV series.

Is Ring O’ Bells from Famous Five? No, although Ring O’ Bells is somewhere I could picture the Five running into a mystery, it’s from The Ring O’ Bells Mystery which is the third book in the Barney Mysteries (sometimes known as the R Mysteries).

Who has been cast in Malory Towers TV show? The full cast list can be found on IMDb.

What kind of jacket does Dick and Julian wear in Famous Five 1978? I actually don’t know the answer to this but I do love those jackets and am happy to use this as an excuse to show them again.

In Malory towers which uni does Felicity go to? Felicity is too young at the end of the Blyton Malory Towers books to have a plan for university, it’s possible that by the end of the Pamela Cox ones she declares her intentions. I haven’t read that far, so I don’t know myself!

I will answer some of these if I can, but some are a bit beyond simple explanations.

Blyton’s attitude to people being fat. There are plenty of plump older ladies with jolly smiles who are popular with the children as they bake lots of cakes, and there are people like Fatty who are fat but it has no effect on their skills or popularity. She pokes fun at Goon as he is fat enough to be too unfit to cycle speedily (and also he’s a pretty horrible person) and at times she has characters who over-eat and are lazy and fat as a result. I don’t think she demonizes fat people but neither does she show much understanding for the many reasons that people might gain weight.

What is the best Famous Five book? Well, that’s easy. It’s Five Go to Smuggler’s Top! (Others might disagree, but they’re wrong). 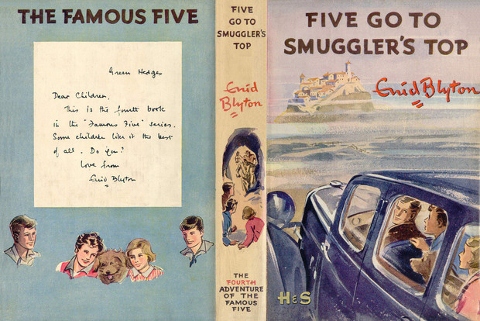 Who is the character within the poem, Firework Night? Give detailed evidence for your answer. The poem Firework Night is from the viewpoint of an un-named dog. The evidence is that the character ‘yelps’ has a tail and ears that can lie flat and lives in a kennel. I suspect that the searcher here might have meant a firework poem by another author, either way, they were looking for someone to answer their homework for them! See below for another couple of example.

I was a bit baffled by these four searches for a while. At first I thought Hindash was an illustrator for the Famous Five, but no. He’s a make-up artist who has a dog called Timmy. This poor, dedicated searcher will have had no luck here and was probably very frustrated by the third or fourth time they ended up on this site.

Dislike Enid Blyton. Well obviously we don’t dislike Blyton here on our dedicated Blyton site, but did this searcher dislike Blyton? Or were they looking for unfair criticism of her?

Love Island from Five Go Mad in Masculine. At first I saw this and thought of the programme Love Island but then I remembered that Uncle Quentin is trying to build a love colony on Love Island in Five Go Mad on Mescalin. The typo (or autocorrect) of Mesculin to Masculine is just so apt it’s funny. 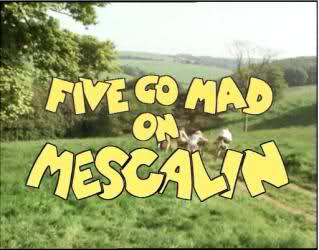 How many impresssions  in the Five Enid Blyton? Impress(s)ions as in editions, or impersonations? Who knows?

Five on Puffin Island Blyton. Puffin Island is from The Sea of Adventure so the Five are unlikely to have visited unless in fan fiction.

Mallory Towers Carlotta. Carlotta was a pupil at St Clare’s not Malory Towers.

That’s still not her name

I may have muddied the waters with Dog Loves Books and Enid Brighton but it still amuses me how frequently Enid Blyton’s name gets butchered on Google.

Enid Blaytin chikdren of green medow. This one sounds like something John Cleese would say in a Monty Python sketch

A short story by nid Blyton

Remember Remember the 5th of November the poor old gut An unfortunate typo!

Snelia Jane books by Enid Blyton with gollywogs. Poor Snelia Jane! No wonder she was such a naughty doll with a name like that.

Now and again we get unusual fan fiction searches. There are always searches for Famous Five fan fiction and so on but here are a couple of the more surprising ones.

Julian x Elisabeth naughtiest girl kiss fanfic. I’ve never thought of using any Naughtiest Girl characters. Somehow I see them as being a good few years younger than the Five but they needn’t be, of course.

Laura Marlin and Tariq fan fiction. These two aren’t Enid Blyton characters but I have mentioned them in my review of Dead Man’s Cove by Lauren St John. Maybe if I ever brought the Five into the modern day (which I’ve thought about) they’d run into Laura and Tariq.

Have you searched for anything weird lately?

This entry was posted in Blog talk and tagged Google, Search Terms. Bookmark the permalink.