Locked down library displays weeks 6 and 7

I’m still doubling up the weeks so that I can get through them a bit quicker. Here are links to weeks one, two, three and then four and five in case you missed them.

An array of Ewan’s graphic novels and guides to the Marvel universe and characters.

I actually did this the day before the 90th anniversary of the first Nancy Drew book being published – by complete coincidence. These are just a few of my collection, with one of each cover style I have across the original mysteries and the newer (well, 80s) files.

It was raining on day 38, so I thought I’d go for a sunny yellow display. Several Blytons here.

An A-Z of reading

A book for every letter of the alphabet.

I think I was particularly frustated this day!

The answer to life, the universe and everything. Food.

The title is taken from The Hitchhiker’s Guide to the Galaxy by Douglas Adams, whereby the number 42 is the answer. But I made it food, because we all love to eat, right?

I’ve made very few recipes from any of these books, I’ll have to admit. That’s the trouble with recipe books for me – I may like a few of the recipes but I’m fussy enough, cheap enough and lazy enough that a majority of them will never be made!

My entire Roald Dahl collection along with some Roald Dahl Top Trumps cards (I tried to pair characters with their books).

Some closer shots of the cards (just click to see them full size). 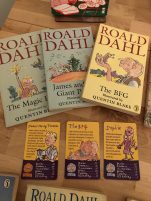 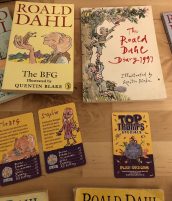 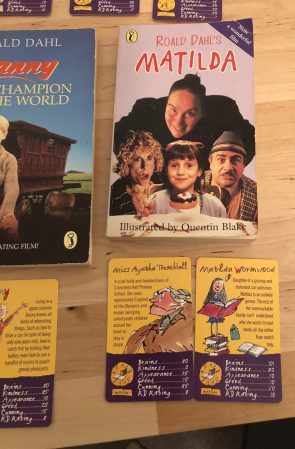 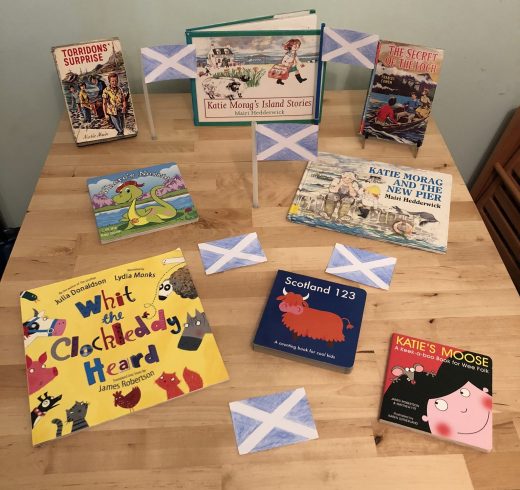 It had to be done! I would have liked to have included the Masie MacKenzie books my Aileen Paterson but I left them at my parents’ when I moved out. I remember using my holiday money a lot of years to buy a new one for my collection. Anyway, what I have included:

Plus flags I made myself!

Tales of the Vampyres

Books about vampire from Charlaine Harris, MaryJanice Davidson, L.J. Smith, and Anne Rice, and some based on the Buffy the Vampire Slayer and Being Human TV series.

I think I’ve felt all the colours in lockdown so far.

All books with secret in the title, with their secret hidden. Because they’re secret.

Can you complete the titles? (I’ll make the hidden words white so you can just click to highlight and read them).

To see a picture of the uncensored books click the thumbnail below.

A selection of my books based on the Charmed TV series.

This entry was posted in General bookishness and tagged Book displays, Food and recipes, Libraries, Roald Dahl. Bookmark the permalink.

1 Response to Locked down library displays weeks 6 and 7