How many Enid Blyton books have I actually read in the last ten years?

As someone who writes upwards of 2,000 words a week about all things Blytonian, I feel that I actually don’t read an awful lot of her books! At least nowhere near as many as I used to.

So I thought I’d have a look and see how many I’ve actually read since I began keeping record in 2012.

I only began recording books in April 2012 – the first month’s record was on a page in a notebook which I think I still have somewhere. Then I discovered Goodreads and never looked back!

Stef and I didn’t start this blog until November 2012 so from April-October I was just reading whatever I wanted, whenever I wanted. Then from November came the reviews! I think I was still buying a lot of Blytons around this time, filling in gaps in my collection and also starting to collect series that were completely new to me. Some (old favourites) I read straight away which would account for the random Famous Fives in 2012, others may have sat on my shelves for some time before I got around to trying them out.

June
Hello, Mr Twiddle
Five Go Off In a Caravan

September
The Valley of Adventure
The Blue Story Book

November
The Mystery of Banshee Towers – I had finally managed to buy a handback of this after a long time searching.

So from that list I can see that I had completed the Josie, Click and Bun series and then read them all, and I must have been buying Mr Twiddle and Mr Meddle books too! Possibly even the Secret Sevens as I don’t think I would have read two random ones otherwise.

As the Old Thatch book is about Blyton rather than by her I’ve listed it but not counted it in the total.

It seems like I continued buying and reading Blyton’s fantasy books in 2013 with my first reads of Mr Pink-Whistle, The Wishing Chair, and re-reads of an old favourite, Amelia Jane.

March
*Who’s Who in Enid Blyton

April
Humpty Dumpty and Belinda
The Mystery of the Spiteful Letters

June
Five Have a Puzzling Time and Other Stories

December
More About Amelia Jane
Five on a Treasure Island – this was me reading two copies at once to compare them but I’ll only count it once!

This is the year I started my Noddy collection and was reading them as I bought them, so in entirely the wrong order!

June
You Funny Little Noddy
Noddy and the Bumpy Dog

July
Noddy Goes to Sea
Do Look Out Noddy!
The Secret Island – another comparison

Well I certainly didn’t let any of my Blytonian reading go to waste this year!

In 2015 I carried on buying and reading Noddy books which account for most of the titles on the list.

February
Noddy at the Seaside
*The Famous Five Annual 2015

May
Noddy Has an Adventure

July
Noddy and the Bunkey

August
Noddy Goes to the Fair

Into the third year of Noddy books now, ending with the Christmas one which I read, rather unseasonably, in the summer. Then I started reviewing the Barney Mysteries, which at least I already had!

I seem to have almost abandoned series completely in 2017 and gone for stand-alone titles.

March
The Children at Green Meadows

May
The Saucy Jane Family – another comparison. Usually I do the first book in a series but I found a cheap omnibus edition that for some reason started with book 2.
The Zoo Book

And then Brodie was born and very little reading of any kind was done!

Once the immediate new born period was over I managed to get back to both reading and blogging, though not really at the rate I had managed before.

January
The Enchanted Wood – the very first time I read this if you can believe it.

April
The Secret of Cliff Castle

May
Five on a Treasure Island – the third time I’ve read this since 2012, this time for a review

July
Five Go Adventuring Again – the first non-Treasure-Island Five I have read since at least 2011.

November
Five Go to Smuggler’s Top – my all-time favourite Blyton book, but the first time I’d read it in at least 7 years.

I read over 120 books in 2019 so it seems shameful that only five of them were Blytons! Though I did read at least ten books that were continuations or recommendations for Blyton fans.

February
Five Go Off in a Caravan

June
Five Go Off to Camp

October
Five Get Into Trouble

If I thought five was bad for 2019, it was only four in 2020! I think in the throes of the pandemic I really couldn’t face reading about idyllic coastal adventures while I was trapped at home.

April
Five on a Hike Together

May
Five Go Down to the Sea

August
Five Have a Wonderful Time

September
The Island of Adventure – my second read since 2012, this time on audio

May
Five on a Secret Trail

September
New Big Noddy Book #6 – I found this on holiday and ended up reading it to Brodie a few times as one of the stories is about a fire-engine. I’ve only counted it once, though!

It’s crazy that by this point there are still Famous Fives I haven’t read in ten years!

January
Five Get Into a Fix 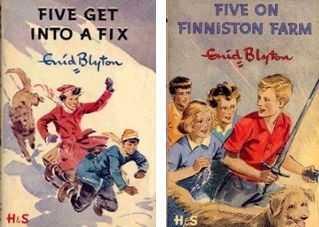 Well, of course anything I haven’t read isn’t on the list. Strangely this includes most of my favourite Blyton series – apart from the books I have done comparisons on I haven’t read Malory Towers, The Adventure Series or The Secret Series. In TEN years! I know time flies but sheesh, I used to read these through every few years.

Maybe once I finish the Famous Five reviews I will start on one of the above series, and probably take a few years to get through them all.

What’s also missing are all the continuation books I’ve read which include six Naughtiest Girls by Anne Digby, two Malory Towers by Pamela Cox, a Secret Seven by Pamela Butchart, several Famous Fives by Bruno Vincent… and various books I’ve read and recommended for my ‘if you like Blyton‘ series.

A further bit of maths

I’m terrible at maths so I’m going to strain myself here (and use a calculator!)

I wondered what sort of percentages Blyton books made each year…

This entry was posted in General bookishness and tagged Reading. Bookmark the permalink.

1 Response to How many Enid Blyton books have I actually read in the last ten years?